James Boyle's "The Public Domain: Enclosing the Commons of the Mind" 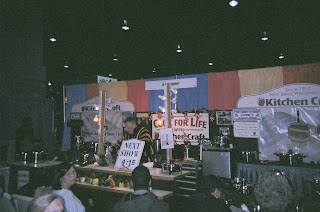 This treatise on the role of intellectual property law in both fostering and sometimes inadvertently discouraging artistic and economic innovation would, perhaps, make a mark for good book report in an AP government class. The book is meaty reading, with long sentences and small print. I sound facetious in introducing this book; it is one of the most thorough examinations that I have seen on the changes in the law that have come with the Internet (and all of its subtechnologies) and all related technology in the past thirty years. The author is a law professor at Duke.

At the heart of the discussion is the role of copyright law, with its “relatives” in patent and trademark law. In a chapter 8, “A Creative Commons,” Boyle argues that copyright law actually does help set up a “commons” with instruments like a General Public License for open source software. It does so by specifying reasonable reproductive use, in good faith, in a manner that makes the original material more effectively deployed in the community. But copyright law does give the originator some rights to prevent misuse. The idea sounds a bit like “moral rights” as understood in Europe.

However, the evolution of the law since the development of the Internet has been indeed haphazard, with many misunderstandings of what would happen when the public was turned loose. Boyle gives the history in detail, and some of it is worthy of being walked through here. He starts his argument with a “warning” by Thomas Jefferson to the effect that society should tread carefully in viewing literary content as “property” in the usual sense.

Boyle gives the history of the Sony Betamax case, back in the early 1980s, which was the first test of the question as to whether a company whose inventions or services “facilitate” copyright infringement could be held liable for the behavior of its customers when noninfringing uses exist and are likely (the Sony Axiom). The Supreme Court, as we know, said no.

He then discusses the "Internet Threat" which supposes an inverse mathematical relationship between the cost of reproduction and threat to publishing business models. But because speech and media has so much intangible and self-reinforcing value, the Internet (and Web especially) showed that such notions were not nearly so simple or dogmatic.

But then, in the early 1990s, early government task forces suggested that the legal structure surrounding the Internet should indeed hold service providers responsible for customer behavior. That did not develop immediately, partly because Internet growth in the early and mid 1990s was not that quick, with AOL and Prodigy offering proprietary content and tending to be able to control customers with their notorious “terms of service.” But in time the Web took off, with ordinary people able to have their own domains, and search engines became enormously effective. Other technologies, like P2P and then BitTorrent, grew. Shawn Fanning developed Napster on his own laptop and launched a new company, probably not fully aware of the enormous challenge his product offered to the established music business (he just wanted to make it easier for college kids to get music). Napster, as we know, got sued, and this time the courts said that some downstream liability existed because of the central registry. Eventually Napster had to go out of business as a free service and be reinvented to become legal.

But then other forms of peer-to-peer file sharing developed, without central registries. Eventually, home users were being sued for illegal downloads, and the case MGM v Grokster was heard. In 2005, the Supreme Court ruled that downstream liability holds when the “business model” is predicated on encouraging infringement.

Boyle goes on to describe “The Farmers Tale”, where we make it illegal to do something (cut ranch fence wire) to prevent other illegal behavior but also prevent some legal behavior. He builds his analogy to a very detailed discussion of the notorious Digital Millennium Copyright Act (DMCA) of 1998, which makes it illegal to circumvent copy protection of various DVD players and other devices, even when the intended purpose would be “fair use.” The music and movie industries were effectively end-rounding fair use. They also regulated how DVD’s could be played back in various geographical areas (which could have been necessary for legitimate local compliance reasons).

The DMCA also contained its famous safe harbor provision, which may have saved the ability of amateurs to keep blogging and promoting themselves in a manner with which we are familiar now – despite the fact that we know that a lot of ISP’s yank first and ask questions later. (Lost in this is the Section 230 of the Telecommunications Act, which also shields facilitators from most liability for what their “customers” post.)

He goes on to discuss the tricky area of derivative works and mashups. In general, holders of music copyright are stricter in enforcing their rights with even very small extractions from their work (he talks about the Bridgeport decision). Can I legally write an publish on the Internet my own “Variations on a Theme of Dominik Maican”? (yes, his Second String Quartet finale plays in my head as I write this.) That’s complicated (no, I won’t). But the subject of music and fair use is obviously touchy, when you get into areas like jazz, where improvisation is so critical. (I’ve had several friends, all the way back to about 1971, who were into this.) One critical point is that copyrights last too long; he feels they should revert back to a much shorter period. (Eldred v. Ashcroft, deciding the Sonny Bono Copyright Term Extension Act, decided 2003, is here.

Following on this is the whole matter of software (whether it is expression or invention), and then biotechnology. That’s where he gets into his discussion of the delicate balance between property rights and innovation, and how the legal environment should be structured. He even gets into whether new life forms could be protected. Then he discusses the issues of trying to protect data (or facts) which Europe does but the United States does not. (Can a recipe be protected?) Yet, the US has a more vital law data (and consumer data) business than does Europe. He explains why Westlaw works as a business (as does Books in Print) even though protection of “facts” does not exist as such. I note here that some news services, like the Associated Press, try to prohibit the “rewriting” of their articles, but since facts cannot be copyrighted, this does not sound quite kosher legally.

At the end, Boyle reconsiders how the Internet could have evolved with much more controls, particularly in the area of downstream liability. Then there would have occurred fewer serious problems (like viruses, spam and predation) much innovation could not have been allowed. We might not have P2P at all, we might not have blogging or social networking sites or any of the “free entry” opportunities for self-promotion that are so familiar.

Boyle doesn’t cover the censorship issues (like the CDA and COPA) and how these could have also stopped a lot of Internet growth, presumably because this is a book about intellectual property. But the concerns over censorship, and particularly online reputation, and now the need for tort reform seem as critical to the future of the Internet – and the average user – as does intellectual property law per se. The relationship between a person’s self-promotional global public speech and his or her social function is becoming a subtle but nettlesome concern in many areas. We still have a lot of dots to connect.

The government’s main link for Copyright Law is here.
Posted by Bill Boushka at 4:42 PM