Paul Krugman on "The Return of Depression Economics" 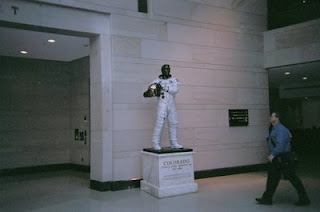 The author is the recipient of the 2008 Nobel Prize in Economics. Fareed Zakaria pitched this relatively brief book recently at the end of one of his GPS hours on CNN. It appears to be an upgrade of earlier books with a bit of a turn toward the end, but the best way for a new reader to grasp the book it to do a “Benjamin Button” and think the book through backwards.

He says we are in “depression economics” – and his thinking pretty much follows the views in the media expressed by people, generally “liberals” whom we connect to the main body of the Democratic Party now, ranging from George Soros to Ali Velshi and Suze Orman – we simply have to recognize the new kinds of risks that we constantly introduce into the financial system (and the real world, for that matter) and figure out the right principles with which to regulate them. We can live with “depression economics” for the time being while are markets are in intensive care (a term Orman uses) – even to the point of nationalizing some financial industries or processes – without re-living the 1930’s style Great Depression, which, when extended worldwide, would probably lead to war and real physical Armageddon. Of course, for many ordinary people now, we are in “a great depression.” That’s why we need to pay attention to what we can do for homeowners, for starters.

The latest “culprit” is “non-bank banks” – that is, what we called investment banks (under Glass-Stengal) until recently, when they all collapsed in 2008. The problem is that they could take the various unregulated risks that exposed investors to more or less the same hazards as the run on commercial banks in the 1930s, even if technically the processes are more complicated. He explains how financial auctions work in that business, and how they can go wrong (the really did on a Sunday session on Sept. 14, 2008, just before Lehman collapses). More specifically, it was the way we securitized and “insured” the housing debt, after propping it up unsoundly. He gives a good explanation of how hedge funds are supposed to work – and what they really do is magnify gains and losses, rather than buffer them the way chemistry students would expect.

He traces the development of “bubble economics” back to the 1990s, with the “irrational exuberance” of the “Ayn Rand”- influenced Alan Greenspan. We saw it with the dot-com bubble (to the point that around 1999, the CEO of the company I worked for then said in a meeting that the stock price wasn’t high enough because the company name did not include “dot com” in it – a statement that seems foolish in reverse, as did a prediction in early August 2001 of a 35000 Dow some day soon). That works back to the first two-thirds of the book, based on all of Krugman’s earlier work and writings, about how the various other financial crises around the world – Mexico, Latin America, and then Japan, China, and Russia, as well as Britain’s sterling crisis which made Soros rich and powerful – played out. (Don’t forget Long Term Capital Management.)

Japan’s prolonged recession is particularly important because it demonstrates what Krugman calls a “liquidity trap” – the genesis of deflationary depression. He illustrates the concept with a simulated “baby sitting collective” where demand varies seasonally but where compensation is extra-monetary – in script. The “threat” of future inflation can be one way to treat a “liquidity trap” – if consumers really believe that cars will get more expensive again, then they’ll start going out and taking the deals now even if the auto manufactures are shaky given the latest bailout politics.
Posted by Bill Boushka at 10:36 AM