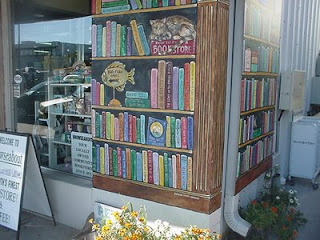 A group called IndieBound, as part of a “sustainability” effort to support local shopping and businesses across the United States, has a program to encourage webmaster to support local bookstores. The posting, Feb. 19, 2009, is called “Info Pages for Books” and is here. There is an affiliate program and a widget for offering the book for sale on your site through the independent store.

Independent stores long have experienced difficulties competing with the large national chains, even in relatively niche-like markets, and this has become even more difficult with e-commerce. I’ve noticed that with my own authored books, that sometimes the prices is higher on indie sights than on the major e-commerce sites like amazon.

Until the 1980s, it was relatively common for small neighborhood books stores to start, particularly those from "countercultures". A young man running for Congress from the "People's Party of New Jersey" opened a "Make Up Your Mind Bookstore" in Madison, New Jersey in 1973, while decrying the concept of profit! Independent bookstores have always been important to the "New Age" culture common in rural California (like around the Mt. Shasta area) and the southwest (as around Santa Fe, New Mexico).

Among many independent stores are LGBT stores, including Lambda Rising.

Picture: from an indie bookstore in Rehoboth Beach, DE, 2006.
Posted by Bill Boushka at 6:21 PM