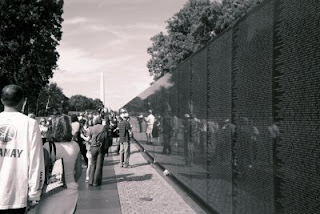 There is a PDF draft of a short book by former Marine Robert Le Blanc on his website. The 57 page book is called “A Marine’s Diary”, which you can link to easily from his home page. He gives a reference to my 1997 book “Do Ask Do Tell: A Gay Conservative Lashes Back” where I mention his experiences in civilian employee discrimination at note 32 in my Chapter 4. My own experience in the military (1968-1970, Army) was much less harrowing but much more subtle (my troubles started in a civilian college, proving some irony).

I have met the author in California and corresponded with him periodically for some time.

The book recounts some harrowing experiences with harassment and investigations when he was in the Marine Corps starting in the mid 1960s. He speaks first of an incident where a fellow Marine, Allen, was interrogated and given a dishonorable discharge, reportedly for “associating with homosexuals” and perhaps not cooperating enough with the NIS investigators' demands to "name names" of other homosexuals in the Marines Corps. Randy Shilts reported such incidents in his 1993 book “Conduct Unbecoming: Gays & Lesbians in the U.S. Military" (St. Martins Press) He also gives a harrowing account of his wounding in Vietnam and medical rehabilitation.

Then Le Blanc would himself face multiple investigations and interrogations and even polygraph examinations on suspicion of homosexuality. He also gives a harrowing account of his wounding and medical rehabilitation. The appendix gives several newspaper stories about the discharge attempts. He would be cleared and promoted to staff sergeant and then drawn into another investigation and subject to court marital, but be cleared. He would later run into illegal discrimination and shenanigans as a civilian employee of the VA.

He also gives some summary of the events of the debate in 1993 over lifting the ban started by President Clinton’s initiative, which would eventually lead to the notorious “don’t ask don’t tell” policy codified into United States Code today.

There is now an effort in Congress to resume the repeal of “don’t ask don’t tell”, originally introduced by Marty Meehan and HR 1246, (SLDN discussion here). Rep. Ellen Taucsher has reintroduced the bill in the 111th Congress in 2009; watch her video of her announcement at the Center for American Progress here.
Posted by Bill Boushka at 7:06 AM

Labels: gays in the military, history

Please see the March 11 posting, review of the book by Nathaniel Frank, for a comment on Le Blanc's book by Tom Hart, MSgt, USMC, Retired. (Generally, I publish the same comment on only one item.)

I think we ought to see books by Margaret Witt and Darren Manzella, too.