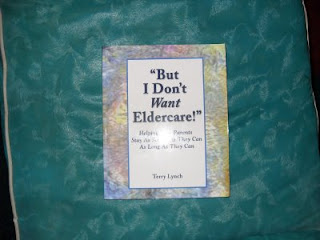 Author: Terry Lynch.
Title: But I Don't Want Eldercare: Helping Your Parents Stay As Strong As They Can As Long As They Can.
Publication and description: Denver: Legal Center for People With Disabilities and Older People. 2008. ISBN 978-0-9970179-6-6 308 pages, paper.

The title of this book suggests an upbeat approach to looking after one’s parents: indeed, they are adults, and ought to be encouraged to remain as independent as possible as long as possible. Technology may provide many methods for doing so, especially for (these days, often single) professional adults in other cities. These include security systems, medical alert systems, and the private sector development of many communities especially for seniors.

But most of the book deals with a practical reality of caregiving: it requires a great deal of socialization, which may be unwelcome to some people, especially those who did not marry and have their own children or whose lives “on other planets” are so specialized as not to be potentially helpful to parents. The social demands often inherent in caregiving can be particularly troubling to introverted adult children who don't want to maintain familial social continuity.

Much of the “social skills” include pressuring medical staff, who often don’t have complete information (the new president’s proposal for medical records seems relevant) or who often don’t always “do the right thing” unless pressured. This is very disturbing: that one has to depend on the social bearing of the adult child to get the best care for the parent, because the medical (or particularly caregiving) “profession” is not always up to the job.

Although the Wisconsin author offers many practical home-oriented tips to make life work for seniors, some issues need great care. One of these is medications. Caregivers need to pressure doctors to completely explain the medication risks (particularly drug interactions, when there are different Medicare providers who don’t have a national system yet to cross-check prescriptions for interactions) and contingencies. For example, for a heart patient on Coumadin (blood thinner), a normally innocuous “24 hour diarrhea” bout can cause life threatening bleeding (partly by compromise of friendly bacteria that normally are essential to blood clotting) and in some patients requires a 911 call.

He does discuss dementia, and makes the important point that most of the time mild “dementia” is not Alzheimer’s Disease. That’s another reason why the socialization is important: many mildly “impaired” “clients” can function better in familiar social situations than when they must deal with abstract ideas and facts by themselves to solve problems.

He provides some cautions in hiring home health, and prefers independent aids and suggests that caregivers do their own background checking.

He briefly takes on the issue of Medicaid coverage of nursing homes (ordinarily Medicare does not cover custodial nursing home care) and the problem of asset dispersal to qualify, for which the federal rules have been greatly restricted. But he doesn’t mention that 28 states have “filial responsibility laws” or “poor laws” that could force adult children to support indigent parents.

He also briefly covers some of the legal instruments like living wills, powers of attorney, and advance medical directors, and even conservatorship or guardianship.

We have challenging trends colliding and creating a perfect storm. Families are smaller, many more people are single and/or childless (people who themselves are now turning elderly), and people are living longer, and, partly because of the way medicine is practiced and reimbursed by public programs (Medicare) sometimes in a frail condition. It used to be that unmarried family members were expected to stay home and look after the elderly, who often did not live as long then. In the meantime, we have grown used to an “individualist” notion of morality, where responsibility is created by personal behavioral choices (like having children). The flip side seems to be growing: family responsibility that happens in a community beyond the capacity of choice. We see more examples all the time in the media of adult children who have sacrificed everything for aging parents, with the 1998 film “One True Thing” strangely prescient. This problem -- being able to replace the emotional attention expected of a deceased spouse -- may be much more psychologically challenging for people who did not (or, as in that film, have not yet) married and had their own children, in order to socialize themselves into “creating” families as well as being loyal to those already created by their parents. (Imagine how this plays out for LGBT people, including those in relationships; it provides an urgent but little understood argument for same-sex marriage.) We don’t have a consistent ethical model in our culture today for filial responsibility, in a world where demographics (and now a broken economy) will surely force the issue (and compound the economic crisis even further). For a couple decades, remember, we've had a "Darwinian" workplace often hostile to family responsibility (although, check the review in April 2006 here of Emily Burkett's "The Baby Boon"). If people will be expected to step in to social responsibility which they did not “choose” we need to develop the mechanisms for people to have the authority they need.
Posted by Bill Boushka at 11:40 AM