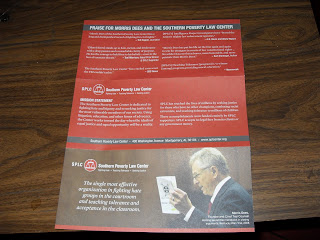 Novelist (attorney, and baseball field entrepreneur) John Grisham has mailed out an appeal to support the work of Morris Dees, an Alabama lawyer who still fights dangerous hate groups.

Grisham’s letter mentions a documentary by Ted Koppel on a verdict won by Morris against a group called United Klans. Apparently this film was aired in October 2008 on the Discovery Channel (I missed it) and it was called “The Last Lynching”. There is a story by Mike Brantley on the documentary in the Alabama Press Register, “Ted Koppel Looks Back at 1980s Lynching in Mobile,” here. which it looks like I reviewed on Oct. 13, 2008 on the TV blog here.

Grisham also writes that Morris has also won a $2.5 million verdict against the Imperial Klans of America.

John Grisham is well known for a number of legal thriller novels with social and political themes, several of which have become major motion pictures. Many of them warn about undercover conspiracies and about how easy it is for an “average person” to stumble into trouble. My own involvement in dealing with the military gay ban has taken on some Grisham-like twists.

My favorite of these novels is “The Firm,” in which a young lawyer joins a Memphis law firm and finds it a front for the Maifa. Grisham coined the terms “goons and fibbies” in the novel. It became a high-profile motion picture from Paramount with Tom Cruise in 1993. A major scene was shot near the Washington Monument the day after the 1993 March blizzard.

Another favorite was “The Rainmaker”, written in first person, where an idealistic young lawyer helps an impoverished family fighting an insurance company for denying medical claims, and uncovers a well-entrenched plot to deny claims. In the 1997 film directed by Francis Ford Coppola, Matt Damon plays the lawyer, and Danny De Vito has the great line “everybody goes after insurance companies”. There is a colorful legal impresario named “Bruiser” in the novel.

In “A Time to Kill”, echoing the plot of Harper Lee’s “To Kill a Mockingbird”, a young lawyer defends a black man accused of murdering two men who had raped his daughter. In Joel Schumacher’s film, Matthew McConaughey plays the lawyer. I remember stopping to see this film on a vacation trip as I passed through Port Angeles, Washington on a summer Sunday night. And a favorite is “The Pelican Brief”, the idea that a mystery document can do so much political damage (sort of like “State of Play”), connected to the assassination of two Supreme Court justices. Julia Roberts and Denzel Washington starred in the film by Alan Pakula.
Posted by Bill Boushka at 10:00 AM