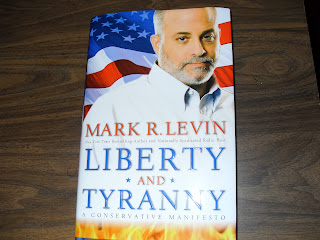 Well, first, I have to chuckle at the use of the word “manifesto” in the title. My 1997 “Do Ask Do Tell” book was called colloquially “The Manifesto” and at least one person wrote that in the comments field in a check to me. I’m afraid that some rants by some rather notorious people have been called “manifestos”.

Webster calls a manifesto “a public declaration of motives and intentions by a government or by a person or by a group regarded as having some public importance.” Wikipedia adds that the declaration may involve “life stance.”

Whereas I was bold enough to propose a constitutional amendment in my last chapter, Levin lady chapter, itself called “A Conservative Manifesto” lays out some general guidelines. Some of them make real sense: a flat tax, which all persons pay and without withholding so that everyone has a stake in reducing it. He wants to eliminate tenure for teachers and hold them to standards in kids’ performance (no problem there). He wants judges to go by original intent. He warns us about the demographics of entitlements by wavers on saying, cut them off.

The book is a best seller, and it is pretty high level, and rather short. I looked up Andrew Sullivan’s notion of conservatism just now (The Conservative Soul: How We Lost It, How to Get It Back: Harper Collins, 2006), and I don’t think that Levin would share Sullivan’s formulation including skepticism and doubt, even if part of the territory of personal responsibility.

Levin sees two opposite poles in the political world: freedom, and “statism”. Now healthy freedom rests on certain postulates, but it’s useful to get at what he disapproves of first, which is attempts by large “special interests” to impose on the entire population to enforce moral agendas that he considers unrealistic or contrived. The biggest fiction is that we can force “equality” without bringing back totalitarianism. Well, right: revolutions often come out of the gaps between the rich and poor, but as we know from Communism, revolutions wind up putting totalitarian governments in place, and starting the cycle of repression all over again. He makes the valuable point that the free market owes no loyalty to anything above it. He goes on to unravel the self-serving nature of the government “bailouts” after the financial crisis last year. Particularly interesting is his criticism (p 55). He’s right that the Federal Register is bloated and gets things wrong (as I found out on the job in 1989 when I rescued a small consulting business from the effects of one of the errors in a simulation model). But most interesting of all is his notice of FDR’s 1944 “state of the union” message (link) where FDR lists a proposed “Bill of Rights 2” including:

The “problem”, of course (as every libertarian knows), is that no one can guarantee these “social rights” (as opposed to “fundamental rights” or even “original rights”) without playing robin hood and using coercion. (I’m going to recommend my own “fundamental rights slide show” (1999) here.

He trashes all the “inconvenient truth” talk of the Gore crowd (and, I’m afraid, ignores all the “real” evidence), going so far as to copy from pp 139-143, of the “list” of harms that global warming has caused, as listed by James Brignell from the University of Southampton in Britain. Online you can find this here or even at the humorous “Church of Global Warming” here (“over 500 things caused by global warming).

Of course, individual freedom has to be anchored in some principles, and he talks early in the book about civil society as the generator. On p 3 he writes:

“In a civil society the individual has a duty to respect the unalienable rights of others and the values, customs and traditions, tried and tested over time and passed from one generation to the next, that established society’s cultural identity. He is responsible for attending to his own well-being and that of his family. And he has a duty to contribute voluntarily to the welfare of his community through good works.”

I wondered, when he mentions “family”, does he just mean one’s own kids if one “chooses” to have them, or does he mean “loyalty to blood” even when one doesn’t have them. Many people see a moral justification for “prosperity” (relative to that of others) in terms of sexual morality, designed as to encourage generativity and homage to social, hierarchal structures. Honor to family is, in a sense, ultimately a kind of "fairness". But we know where that can lead. Yet, we know that social traditions become necessary because there are so many problems beyond the control of individuals.
Posted by Bill Boushka at 6:59 PM