Dr. Laura's "In Praise of Stay-at-Home Moms" (and a visit to "The Ultimate Frontier") 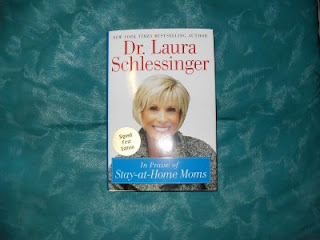 Well, Dr. Laura Schlessinger earned some gentle notoriety in the 1990s with her common sense morality on radio talk shows, and her books, including “How Could You Do That” and “The Stupid Things” that both women and men do to ruin their lives. She would talk about stupid conception, and note that, after divorce, kids were often better off with the remaining single moms than in new families with step-parents.

And she would also open with the tautology, “I am my kids’ mom.”

And she used to punt back to God’s law, although in recent years that has become much less politically acceptable. She has made gays made, with her use of the phrase “biological error” (here is an account from "Outraged Richard", also on Wikipedia) and then her preference to Richard Cohen’s “Coming out Straight: Understanding and Healing Homosexuality.”

But, more recently, she appeared on Larry King Live to discuss her book, and said that committed gay relationships were a good thing; it’s always good to encourage commitment.

But let’s get to the book itself. The copy from Amazon came with her autograph, in red. That’s unusual with Amazon orders in my experience. The book is written in simple language and has many letters and notes, some of which are not always written with perfect clarity.

In her introduction, Schlessinger insists that she is not trying to re-ignite the culture wars; she is writing mainly for the benefit of kids, who really do benefit from a full-time mom. She coins an acronym, SAHM (that reminds me of a not-so-nice acronym from troubled times of my young manhood, “shim”). But it’s impossible to resist going down some existential paths, and she hints at some important conclusions even for people who don’t have their own kids: this is your business, too.

I interrupt myself here: on NBC Nightly News on May 4, 2009 there was a report on a study, claiming that a stay-at-home mom’s compensation would be $123,000 a year on the corporate marketplace if women were to be paid fairly. And the number thrown around for women who work full time and follow Betty Friedan’s lead, by way of comparison, was $76000 a year. And, I must add (by the way, in fairness) that Schlessinger mentions that working mothers often lean on stay-at-home moms (because they had “so much time”) to help with the dirty work (p 163).

One of the trickiest points, at which Dr. Laura digresses from Ayn Rand’s “non-contradiction” policy, concerns how to get hubby to go along. At one point she seems to say, if your fiancée won’t agree to become the sole support, then find someone who will. But later, she deals with the immediacy of pregnancy (she talks about hers early on, at 35) and says, woman, make up your mind and go tell your husband you will stay home with the kids.

I divert again for a moment. Back in the 1980s, I investigated the “Stelle Group” of Richard Kieninger (Eklal Kueshana), with the book “The Ultimate Frontier,” and the planned communities he set up, one of which was to be Stelle, IL (near Kankakee) which, at the time of its establishment around 1970, had as part of its homeowners’ bylaws a requirement that the husband be the sole breadwinner in the family. It later dropped the requirement. But Kieninger’s book went into some long discussions about why it is mandatory for a man to marry and have children, and I’ll come back to that. I remember those Sunday sessions at the Unitarian Church in University Park (Dallas), Texas in the 1980s.

Dr. Laura takes the position (on p 47 and following) that wives can demand that their husbands be “man enough” to become a sole breadwinner. Okay, I get it, and I’ll say that when I was growing up, particularly through my tween years in the 1950s, I had good reason to wonder if I would ever become “competitive” enough as a “male” to provide for and protect women and children (by way of comparison to the families of others, as seen by the values of the 1950s). That certainly affected my thinking. On p 201, in her “post-post script” (I don’t mean a printer), Laura gives, in italics, “Mother Laura’s Top Five Things a Dad Needs to Do to Help His Wife Be the Best SAHM She Can Be” (and she’s not an Army of One).

In fact, let’s project on to male psychology. I’ll venture from political correctness and say that, if I really got into the idea that I would “live forever” through my progeny if my own life came to nothing in terms of individual cultural accomplishments, then I might find “providing for and protecting” a woman and family could be “exciting” (I could be more explicit). I didn’t. Even by the 1950s it was becoming apparent that a technological world (IGY was coming, with Sputnik) would offer different strokes for different folks, and would need its future incarnations of Alan Turing. But I can imagine that if I “invested” in progeny, I would have wanted to be pampered as a parent and would have become intolerant of those not “brave” enough to take the dive – which I didn’t.

She gets warmer on p 74 when she writes: “Life is just not always fulfilling. Callers who have to care for the elderly in their families when they already have their own marriages, children, and mortgages to deal with are not necessarily feeling very fulfilled by changing adult diapers and listening to the same stories time and time again. Yet it is in these efforts that we perfect the world.” The last sentence is peculiar. The world is not perfect, so we have karma – even group karma. We have community as well as justice.

On p 109 she prints a letter (not that precisely written) about a childless woman, visiting a grocery store for routine shopping, who found herself suddenly being hugged by two loose children from the nearby(?) day care center. You start to put the pieces of this together. I’ll add that when I was substitute teaching, I was “ambushed” by a couple of “child care” situations for which I am totally unprepared and which I found humiliating (including one request to borrow some swim shorts and man the deep end of the pool, at age 61). My problem wasn’t “stupid conception”, it was anti-conception; I still had to become involved in other people’s conception.

On p 135, she becomes critical of men who feel attracted to women that can pretend to “have it all” or “do it all” (which is partly why some are attracted instead to other men). She says that men realize they have fallen into a “trap” and “regret once they are married that they don’t have a giving ‘mother earth’ type wife to make the house and home and make her family a loving priority.” Right afterwards, she reiterates her sermons (familiar to radio audience) critical of society that maximizes “self-centeredness” and minimizes “choice” (I think she meant to say “maximizes choice and minimizes accepting obligations”).

So, in a community, some of us wind up being affected very much by the “choices” others make. We rarely fully understand our interdependencies. I think that Dr. Laura would have done well to include an extra chapter (not just a few "hints") on just how people who don’t “choose” to marry and have children should be affected by her ideas. Ok, life happens. It’s not perfect. But the insinuation is that every man should prove that he can be the sole support for a woman and family before he “enters the world.” Is that what she wants?

Back in the mid 1990s, I worked with a man married to a stay-at-home mom with four kids – and they wanted to move further to the exurbs where there were more stay-at-home moms. We took corporate transfers, for very different reasons, at the same time to Minneapolis in 1997. We were moved on the same van. I thought I had a lot of household good, but his family took 80% of the space on the van. I was loaded last and unloaded first. Single people often come at a discount. I recently came across your blog and have been reading along. I thought I would leave my first comment. I don't know what to say except that I have enjoyed reading. Nice blog. I will keep visiting this blog very often.