Donald J. Trump: "Think Like a Champion": Trump's own "literature anthology" of his own essays 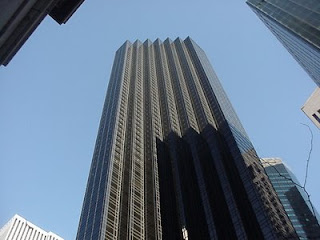 Back in 2004, “The Donald” (that is, Donald J. Trump, in case anyone out there never saw “The Apprentice”) gave us the arrogant paperback “How to Get Rich”, and this time he offers an anthology of his short essays, “Think Like a Champion: An Informal Education in Business and Life”. The book has a foreword by Robert Kiyosaki, and was co-written by Meredith McIver. The publisher is Vanguard, with ISBN 978-1-59315-530-8, hardcover, 198 pages, indexed, with fifty essays.

No essay is more than three pages, and since they start on odd pages, there are many blank back pages.

Everything in the essays is high-level, and seems written with the tone of a 1980s motivational tape (I knew someone who was flown down “to Waco” to be considered as a salesman for these back then). Some people like these.

And the tone for every single one of them is upbeat. One has to follow his own personal calling in life. I buy that, except that sometimes externals and even calls for sacrifice can get in the way, for real people.

One of the early essays is called “Innovation”, and Trump certainly agrees that sometimes a single person’s idea can take off spectacularly (look at Facebook).

He does talk with some candor about the 2008 Financial Collapse, which he calls the Shock Market. He calls Bernard Madoff a sleaze bag and says that Madoff provides a lesson that everyone (including smart people) must do their due diligence. He speaks out for financial literacy, and seems to take the position that people should educate themselves rather than depend on financial planners and “experts” who call them for business. He says that it is important to organize one's own access to knowledge (I suspect he likes Wikipedia) and yet it's not cool to become a "know-it-all" (he mentions that at least twice). One has to be flexible and ready to learn and sometimes change mindset or mentality.

He does have a chapter “How to Get Rich” and this time he doesn’t mention, as he did in the 2004 book, that Apprentice candidate Troy McClain let his legs get waxed “for the good of the team” on a “Negotiation” assignment.

Another chapter is called “It’s Not Personal – It’s Business” when the boss says, “You’re Fired.” I recall a particular Apprentice episode where he fired “Bradford” for thumbing his nose at the “exemption from firing next week” rule, which he called “stupid” and “life-threatening” and something that could take a company down the tubes.

He has a chapter called “Reputation” which he talks about in terms of corporate brand. He doesn’t get into the subject of online reputation, which I would have loved to see him discuss; what are the policies in his own companies?

“Trump University” has an interesting blog, here.
Posted by Bill Boushka at 6:12 PM