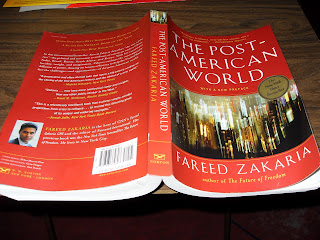 Fareed Zakaria is the host of a Sunday CNN program “Global Public Square” or GPS, and last Sunday he half-apologized for his own ego or vanity and recommended his own book, here, as a Father’s Day present. But I don’t know that international politics and economics is more dad-stuff than mommy-stuff today.

Zakaria’s thesis is somewhat optimistic: it’s not that America is in decline, it’s that it must change, and that the rest of the world is coming into its own. As in the PBS documentary “Guns, Germs and Steel” explaining why European civilization was dominant for half a millennium, Zakaria explains the historical and geographical circumstances that led to American dominance – and his explanations are bit from the conservative side (admitting that Chinese myopia really “worked” for a few hundred years), even if generally he writes and talks like a moderate-to-liberal Democrat, somewhere between Clinton and Obama. He draws and interesting distinction between totalitarianism and authoritarianism, the latter of which is on the famous Nolan Chart (“the World’s Smallest Political Quiz”). It’s possible for a country like China to maintain a somewhat benevolent, paternalistic authoritarianism and compete like capitalists – much as Ted Koppel showed in his documentary series for the Discovery Channel in 2008. And it’s possible that neo-regulation may really be necessary for America to maintain competitiveness. Zakaria puts the failure of the auto industry on the way the American health insurance system works – I think it’s more than that.

Zakaria provides some discussion of the “empty cradle” problem – that white populations in Europe and, to a lesser extent the United States, don’t replace themselves, partly because we have made it so difficult to carry out the responsibilities of parenthood in a hyper-individualistic society – a value system that can split open under the pressures of an aging population as well as international politics. But the United States has some advantages over Europe and certainly other societies in its ability to assimilate immigrant populations. The US economy is still the most flexible; it is the political system, once the envy of the world with its separation of powers and federalism – that seems to be locking up like a transmission that’s never had a fluid change.
Posted by Bill Boushka at 4:31 PM