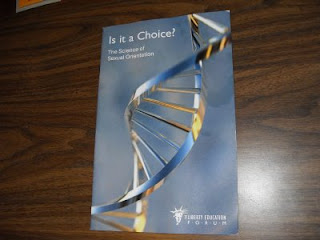 On Sunday, June 14, at Capital Pride in Washington DC, the Log Cabin Republicans were handing out a 24-page booklet “Is it a Choice? The Science of Sexual Orientation”, authored by the Liberty Education Forum. It appears that the LEF is actually part of LCR, and you can read the booklet free online here.

The paper is balanced as to the science, and there is a lot of discussion of brain structure (the INAH3), the work of LeVay, and the work with the Xq28 and other similar areas of the human genome. There is also discussion of birth order: it seems that younger brothers are more likely to be gay, suggesting uterine influences, and a number of subtle biological traits like smell and even finger length. I’ve personally seen somewhere a claim that gay men are slightly taller on average than men as a whole (I’ve noticed that on any gay disco floor there are always a couple of “very tall” men but I don’t know if this is statistically average or not.). But, there is no reasonable way to tell from “appearance” a man’s sexual orientation. There is no reliable connection to body build, strength, or other obvious factors.

There seem to be some subtle differences in the way gay vs. straight men process emotion relative to cognition. All human learning and behavior involve these two components (we really learn this from studies in aging). Gay men may actually have superior cognitive skills in some areas but these may interfere with the usual interest in responding to emotions related to procreation.

One of the most interesting observations comes from a study in Italy that explains why genetically-related homosexuality (in men) could persist even though it would seem to discourage reproduction. That is, the genetic trait in females tends to make them more fertile, and more receptive emotionally to men, and leads to females having more children. In a given population, it is desirable for women to have more children, whereas, from a biological viewpoint, it may not be as essential that all men pass on their genes (as many men will seek multiple partners anyway); so a “gay gene” could actually result in a net increase in a tribe’s population growth. (Along these lines, imagine the passionate character Sami in the soap "Days of our Lives" as a gay man instead!)

As for the moral implications, we are left with ethics and philosophy, but not science as such. Some people believe that all persons have a basic obligation to society to contribute to generativity or reproduction, regardless of genes.

The book refers the work of Chandler Burr, and I have read his monumental book “A Separate Creation”, published in 1996 by Hyperion (a Disney subsidiary), causing controversy then that led to calls for Disney boycotts from the religious right (but so did “gay days” at Disney parks). The original hardcover ran 288 pages and carried the ISBN ISBN: 0786860812. The book was written as a narrative, where Chandler Burr described his own adventures and road trips around the world (particularly the California coast) in investigating a scientific mystery. Burr had written “Homosexuality and Biology” in the Atlantic in 1993 about the time of the 1993 March on Washington, during the first Clinton term. The book would lend itself to an indie-film documentary.

The Liberty Forum had published an earlier paper in 2005, “The Only Question that Matters: Do People Change Their Sexual Orientation?”

A related post from April 2007 on my LGBT blog about an evangelical claim that it would be acceptable to treat the unborn in utero to prevent homosexual orientation, an idea that would offend mainstream western sensibilities, I hope. I thought we weren’t supposed to manipulate “nature” with some sort of “Brave New World” use of technology.
Posted by Bill Boushka at 9:10 AM