Paula Span takes up eldercare in "When the Time Comes" 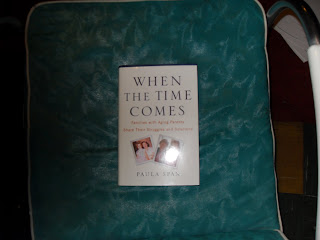 Paula Span writes columns on eldercare for The Washington Post, two of which I have recently discussed on my retirement blog. In this book, she explores most of the major options for caregiving and eldercare, with personal life histories, many of them in the Jewish communities around New York and Boston, and with some general advice, in bold italics bullet-points at the end of each chapter.

She covers five major opportunities: aging in place or at home; moving in with relatives, going to assisted living, going in to a nursing home, and hospice. She does cover what government will reimburse, such as the principle that Medicaid mostly deals with nursing homes, and that Medicare generally does not pay for “custodial” care -- hence the spasmodic development of a long term care insurance industry. She also correctly describes hospice as not a “place” but a change in aims of care (with more support from Medicare, usually). She points out that assisted living communities accept residents within a certain range of capacities, and many often progress to nursing homes and hospice. She discusses the value of professional geriatric care management.

She does not discuss the idea that an adult child might move in with a parent if the frail parent is fortunate enough to have an ample home and be financially stable. Nancy Polikoff had discussed the sensitive idea that a childless (often gay and without partner) person might, among siblings, be expected to do this in some families, especially among available siblings (Sept. 2008 reviews).

She also, as far as I can see, doesn’t mention state filial responsibility laws, or poor laws, which mandate that adult children provide for indigent parents, including their eldercare or nursing home bills. 28 states have these laws, and they are more likely to try to enforce them in the current recessionary environment.

That brings me to the “moral” or “social values” questions, which she does take up in her Introduction. On p 19 she writes “No one could characterize a patient’s intensifying illness, or the response it demands from children, as a positive development.” Soon she discusses the phenomenon called “caregiver gain” as concomitant to caregiver burden. She quotes gerontologist Kenneth Doka as having written “the self-sacrifice that caregiving entails offers a deep sense of personal fulfillment. It demonstrates a persistent ability to transcend self—to sacrifice for another without regard to one’s own needs.” Indeed, depending on circumstances, caregivers often do neglect their own health and can become impoverished or dependent themselves on others because of the experience. The general tone of family (outside of just spousal, which had already involved making a "choice" to say "I do" in the distant past) caregiving is "step up" and "I'm elected" (or "selected"). Caregivers who do "sacrifice" may well believe that others (especially outside the family) indirectly benefit from their "sacrifice" and resent the fact that others who haven't "walked the same walk" don't see their own hidden dependencies on the potential sacrifices of others; this is the age old karma problem.

All of this needs to be understood in terms of demographic shift: in certain populations, there are fewer children (the Christian right speaks of “demographic winter”) and an aging population with people living longer because of medical advances. Although medicine also delays some disability, on balance many adults live many more years, perhaps half a generation, than they did even fifteen years ago with significant disability in terms of frailty or dementia.

At the same time, our culture has tended to become more individualistic, with less emphasis on the common family experience governed by the stable marriage of parents, which used to own the “power” to allocate “sacrifice”. We tend to “measure people” in terms of individual performance, a trend that really became accelerated in the workplace in the 1980s until Congress had to act and recognize the need (and benefit) to allow for disability and family responsibility (and many will argue that we don’t do nearly enough with family leave, compared to European countries). An individualistic, global culture doesn't like to admit values that "encourage" individual decline, even if any integrated community knows that this must happen as part of a natural process where people share sacrifices over time. We tend to think of family responsibility as created by the choice to have sexual intercourse and procreate. Indeed, most adults will face family responsibility that they did not choose, and it’s appropriate to develop a sense of “right and wrong” and of expectations.

Span covers the wide range of strategies available for caregiving, but demographics and various social and political circumstances can only portend for a shortage of hired caregivers in the future. Some homes, she says, become almost like intensive care wards, with family members performing intimate tasks previously thought unthinkable. She notes, by the way, that there can be advantages, as well as risks, to hiring home aides directly and dealing with employer paperwork (EIN’s, green cards, and the like) oneself comparing to going through agencies, which charge more but which generally handle the legal risks. She notes that daughters do about 70% of the hands-on family caregiving, but that may be “just” because women tend to live longer and use (“consume”) caregiving services longer. But without managing the ability to hire others, the caregiver would be forced to redefine the whole intention or his or her own life, beyond what a “libertarian” society considers in a society based on “consent.” Pan notes one particular client who, at 96, said “I hate you. You’re no longer my son. Who ever heard of a child not taking care of his parents?” But that need has increased astronomically in the past two decades, and may have ambushed a whole generation grown accustomed to individualism and “meritocracy,” based on “choice” and “consequentialism”. We do need a “caregiver’s bill or rights” and “bill of responsibilities” both: we need new “rules of engagement.” The eldercare crisis, which still escapes the mouths or most politicians, will fit into debate on "generativity," and how we develop sustainable communities in the future.
Posted by Bill Boushka at 10:41 AM