Dominique Moisi: The Geopolitics of Emotion 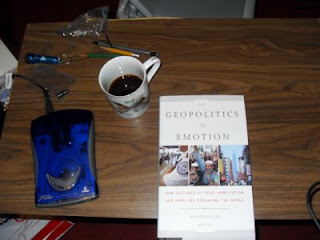 This short book was a recommendation from Farred Zakaria on his GPS program on CNN. The author, a Holocaust survivor descendant from France, views emotions as driving not only the activities of individuals and families but of whole cultures and countries. His theory is a bit like that of an 11th grade US history teacher I had around 1960, who likened countries and groups to people.

After all, most people see self-interest in how they “live”, and often particularly how their families and progeny do, and they tend to view public policy questions through that filter. Self-interest generates seemingly contradictory emotions: pride and shame both.

So it is with countries. Hope more or less characterizes Asia, most of all China, which can accept an authoritarian and circumscribing regime in order to offer future material prosperity. He attributes some of this to China’s “permanence”, which provides some contrast with India. Japan he sees as a special case, somewhat because it evolved in an area of the world so prone to natural mega-disasters.
Humiliation pervades this Islamic world; Moisi does sketch and trace the historical record for the fall of Islam from its dominance a millennium ago. But it becomes personal when it translates into shame, and emotion that helps explain the suicide bombings.

Fear pervades the West, whose individual citizens can fear that their prosperity is ill-gotten and could be expropriated by external forces or even natural ones (or hybrids, like global warming). They sense that the shame forced on others might be met with force to bring everyone low to the same level. I remember this sense of indignation from the Far Left when I was a young adult in the early 1970s.

Radical Islam, for all its talk of the literal edicts of the Koran, seems focused on the “meaning” of “virtue”, very public (since Islam does not separate religion and state), which translates into a hierarchal social system in which men in charge of families (sometimes polygamous) are responsible for providing for and protecting women and children, who must accept their leadership in the name of sustainability. Of course, this means that women normally cannot assert themselves as westerners expect, and that people are not free to operate outside the family and religious structure – but that sounds like fundamentalist Christianity, too.

Moisi takes a shot at American hyper-individualism, bringing to my mind and old 2004 article (by Bill McKibben) in Mother Jones about "hyperindividualism v. solidarity". He is particularly critical of American fascination with gun ownership for self-defense, even though we know that residential self-defense can be a major deterrent to crime. Perhaps we have taken "personal responsibility" so far into its logical endpoint as a virtue that we become vulnerable to fascist manipulations ourselves. On p. 13 he warns that the "rich" should not kid themselves into a complacent experience of false "self-sufficiency" and ignore what is going on around them; "Today, not to intervene to alleviate the sufferings of the world is a form of intervention."

Moisi sketches some scenarios as to how the world will look in 2025 if Fear prevails (it’s not pretty) and alternatively if Hope does. He doesn’t sketch the potential Armageddon if Humiliation takes over.

He also provides some interesting mixed perspectives on Africa and Latin America in terms of these emotions.
Posted by Bill Boushka at 8:41 AM