Jim DeMint: "Saving Freedom" -- from socialism, but that depends on what you mean by socialism 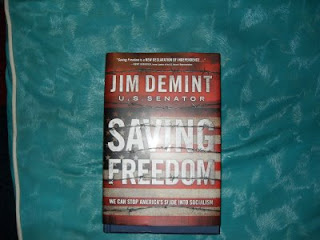 In fact, in my own thinking, I’ve always perceived a certain bifurcation as to moral matters: the modern libertarian emphasizes personal responsibility for the consequences of one’s choices; the religious moralist is concerned about karma and the sharing of less visible risks and burdens. The latter was very important when I was growing up.

Each of DeMint’s fourteen chapters (in three parts) begins with an anecdote in italics; I like the one where he sees Don Quixote as a metaphor for socialist government.

Some of DeMint’s prescriptions sound like standard Forbes stuff: Go to the flat tax, privatize social security, give Americans tax-free grants to buy their own portable health insurance. He does like the freedom that technology has given people and encourages blogging – but he also encourages running for office in his list of citizenry duties.

But it is in the moral areas that DeMint has some explaining, or maybe he just sees certain things as a given. On p 65 he writes “Same-sex couples must not be honored with the institution of marriage. If they are, the moral standing of marriage will be reduced to that of homosexuality.” On p 160, talking about the Griswold contraception case, he writes “The so-called ‘right to privacy’ was extended to procreative sexual acts and to cover abortion. This ‘right to privacy’ was later stretched to the breaking point when the Court declared sodomy laws unconstitutional and gave presumed legitimacy to gay marriage.” And he casts “freedom” in terms of the right to discriminate, at least on one’s own values, and opposes ENDA.

I think there is a pretty good clue to the “rationalism” in his thinking in the way he presents dependency (bad) and interdependency (good). DeMint supplements this idea by talking about the seamlessness of business, volunteering, faith and family in his own life.

A lot of people depend on the government for services that used to be supplied by families, and that might have to again. That may impute a “false sense of freedom” for some people, from responsibility for others, outside of the scope of the obvious responsibility that comes from certain choices (procreation). Within any family or community, faith-based ethical systems usually expect the more externally competitive members to commit themselves to “attachment” (to use a Dr. Phil term) with the less fortunate members and make family responsibility (even outside of child rearing, say to include eldercare) an important personal priority. That is the “conservative’s” idea about how uncertainty and misfortune is to be shared, although it does not answer the obvious enormous legacy inequities between large groups of people (by race, religion, country, etc).

Before, on these blogs, I’ve covered hidden “conservative” theories – actually just old school social contract thinking – that one way you get everyone to invest in the right kinds of “attachment” is to let (heterosexual) marriage have a complete monopoly on sexuality, so that deviation is no longer thinkable. Then everybody plays. Curiously, that kind of thinking sounds like what DeMint says he detests – communism, or at least psychological socialism.
Posted by Bill Boushka at 3:56 PM