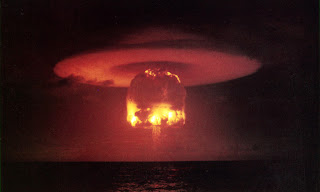 Dell, MSN and Good Magazine have been treating visitors today to a slide show, or “last picture show”, “waiting for the end of the world”. The link is here.

Some of the pictures come from the Charlie Hull shelter in Montana. The attitude toward “Dr. Strangelove” ranges from moralistic penance to a sense that one lives in a new underground heaven where one is king, as long as one lives by “family values”. But I don’t know what future one’s progeny would have if forced to rebuild society underground.
Other shelters, such as in Conroe Texas, and in Utah (Mormon) are shown.

In August 1997, I took the tour of the Greenbrier facility at White Sulphur Springs, W Va, where there were dormitories and session halls set up for the House and Senate.
I don’t think these shelters envision a global Internet or electronic communications. It would be “back to basics”. And food can run out eventually.

The material comes from “Waiting for the End of the World” by Richard Ross, from Princeton Architecural Press, 2004. Curiously, I don’t find this book on Amazon.

I have an old anthology-like or coffee table book by Bruce D. Clayton, Ph. D., "Life After Doomsday: A Survivalist Guide to Nuclear War and Other Major Disasters" Boulder: Paladin Press, 1980. ISBN 0873641752. I remember buying it during the Iran hostage crisis. The book is motivated by the Cold War; it tells more aggressively-minded people how to set up and defend "survivalist" communities after cataclysms, reminding one of today's Sci-Fi series "Jericho." The book is dedicated to the survivors of (Discovery Cahnnel's) Pompeii!

Attribution link for DOE public domain picture of a nuclear explosion from Wikipedia
Posted by Bill Boushka at 6:44 AM