Jeff Sharlet: "The Family: The Secret Fundamentalism at the Heart of American Power": when Jesus constitutes everything 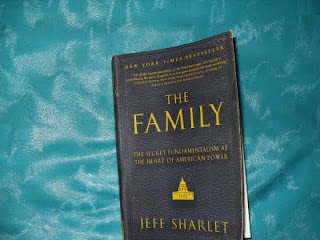 Title: "The Family: The Secret Fundamentalism at the Heart of American Power".

The author is a visiting research scholar at New York University’s Center for Religion and Media. And his thesis, which he tries to document with some street experience, is that American political and economic power, throughout his history, has been directed by a cabal of businessmen and politicians who meet as a kind of semi-secret society, under the veneer of fundamentalist (maybe evangelical – that’s not the same thing) Christianity. The cabal is responsible for the National Prayer Breakfast and for many other faith-based initiatives that have been pushed by largely Republican administrations.

His first chapter, in fact, depicts his own stay (I think in 2001) at an estate in the northern (wealthier) part of Arlington VA called Ivanwald. Here, some religious men live together in a kind of pseudo-monastery-like community. Sharlet alludes to a tad of hidden, latent homoeroticism, when he talks of the swimming pool and of one younger resident particularly proud of his buff, hairless chest. And at various points in the many succeeding chapters, tracing religious and conservative leaders back to the 18th Century, he does also note the evolution of anti-gay rhetoric, as somewhat of a corollary of a deeper need for moral rationalization of a power base. But this is all familiar stuff, to anyone, like me, who lived in Dallas, the buckle of the Bible Belt, during the Reagan years (when AIDS broke out).

Then, there is the issue of the title of the book, “The Family”. On p. 180, mentions the idea that in a religions nation of rugged individuals, “family captured that paradox more neatly, a nation of cozy little kingdoms ruled by Father.” Remember that in the “Manifesto” book by Carlson that I had just reviewed, the “family”, rather than the individual, is the granularity of self-concept, and this passage hints of that; but what “The Family” here addresses is a more conventional view of conservative morality: the world needs to make sure that every individual “pays his dues”, and while “family values” tend to push that, the real way to make the world “collectively” moral is Christ-centeredness. Sharlet discusses a concept called piety, where religious faith seems to exist for its own spiritual ends (saving souls, perhaps, as I always heard in Dallas – and the entire inerrancy debate) , but the effect is to get every individual to understand his God-intended place in the world where a social and political order seems controlled by others (indeed, by “The Family”). So Faith and Politics become interchangeable or convertible, like Einstein’s mass and energy.

Sharlet has an odd “general relativity” equation, that reads “Jesus + 0 = X”. (In cosmological physics, unlike group theory, there is no additive “zero”). That is, Jesus is everything, and is all you need; nevertheless there is a paradox, perhaps expressed by that notorious Parable of the Talents: in the rightful moral order, some people will have more than others (both in terms of possessions and public limelight) because if Jesus is at your heart, it finally doesn’t matter; it’s just an operational necessity. Sharlet’s book, almost 400 pages, constantly goes through various metaphors expressing this kind of paradox. For example, on p 290, in a chapter called “Interlude” (a kind of introduction to a symphonic finale, his book’s Part III), he concludes with

“What the elite and populist movements of American fundamentalism have together wrought is not a culture war but a cultural evolution, one that is adapting to the twenty-first century faster than secularism. This religion isn’t an opiate of the masses; it’s the American Christ on methamphetamines.”

It's also noteworthy that Starlet, in covering the WWII period, addresses the tendency of religious fundamentalism to migrate toward fascism. On p. 133 he writes, "It is Christianity itself that has prevented fundamentalists, America's most authoritarian demographic, from embracing the cult of personality around which fascist states are organized." But even as Carlson hinted (previous review here), hyper-individualism can flip over into embracing fascist aims. Imagine a "truly indie" movie titled "The Fundamentalist".

In his last section, Sharlet does talk about hypocrisy and the fall of some fundamentalist or evangelical Mega-church pastors, particularly around Colorado Springs, the “Jerusalem” of evangelical Christianity, and particularly Ted Haggard, although he skips the details of the gay trysts that led to Ted’s fall (as in the book by Mike Jones reviewed her Feb. 15, 2009).

The operational effectiveness of this “cabal” has another significance: many (although not all) of today’s socially conservative think tanks and websites are derived from this “Family”, according to Sharlet. That comes as no surprise. But it raises an alarming question. We’re seeing a backlash to the “Wild West” era of the Internet that guaranteed everyone a voice with no risk and no capital. If that’s lost, as I have suggested in previous posts, organizations like the Family will have a lot more control over how things get debated.

Indeed, we’re going to arrive at the view that “drawing attention to yourself” publicly automatically subsumes that you must have responsibility for others; the concept of accepting dependence doesn’t wait for sexual intercourse or for making babies. Just think about the little known areas where this could lead, to the delight of people like the Family: added enforcement of filial responsibility laws, for example. If you believe in individualism, you have to wonder if you owe an intrinsic obligation to support others. That kind of concept transcends religion, but maybe it is the essence of the morality that Jesus (plus zero) taught. But it also expresses a deeper kind of systemic justice: "If I had to do it, then you have to." Chairman Mao knew (and tried to implement) that moral paradigm.
Posted by Bill Boushka at 8:03 AM