Al Gore: "Our Choice", on climate change, and maybe demographics 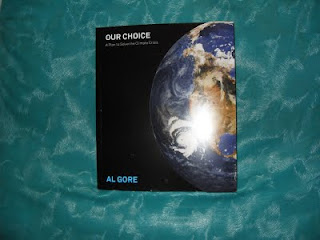 Al Gore’s “Inconvenient Truth II” comes as a grandiose paperback book “Our Choice: A Plan to Solve the Climate Crisis”, published this fall (2009) by Modale/Melcher Media, with ISBN 978-1-59486-734-7, 414 pages, paper. The book is rather like a film (or film strip, as we called them in grade school in the 50s), with an enormous number of high quality photographs and engineering diagrams. On the back page, Al Gore discusses the minimal carbon footprint in publishing and printing the book.

The most challenging part of the book is the last, the last five of the eighteen chapters, where Mr. Gore examines the social, political, and most of all psychological impediments to adjusting to climate change. Human beings are unique among animals in being able to pass a culture on to the future, but the time scale of climate change is so great as to test even our advantage with “Kultur”. There is a problem with the way our “free markets” work, emphasizing short term profits and rewards. And there is the most subtle problem of all: with the advance of hyper-individualism, almost ironically as a logical consequence of the use of reason, the need for man to act again as a social, even conjugal being, caring more about the future of his line than about himself, comes into play as an issue of social “sustainability.” But he also is critical of the way big special interest (even ExxonMobil) manipulate the media to distort the science of the problem and hide the truth; in his view, the democratizing influence of the Internet ought to be a good thing.

The earlier chapters of the book go into great scientific detail about how greenhouse gasses work, and then as to how all the renewable energy technologies stack up. In that sense, the book would make good subject matter for an AP Chemistry book report assignment. Mr. Gore gives detailed discussions of the biofuels controversy, pointing the way toward advances; later the describes the smart grid (much as did Thomas Friedman in 2007 with Thomas L. Friedman: “Hot, Flat and Crowded: Why We Need a Green Revolution, and How It Can Renew America”, Farrar, Straus and Giroux, hardbound, 438 pages, indexed, ISBN 0-374-16685-4. Mr. Gore offers many other interesting details, such as the “Kneeling Curve” (that ought to impress one of Jake Gyllenhaal’s roles as much as “pie charts”), a graphic picture of mountaintop removal strip mining for coal, and a positive discussion of the future of nuclear power – except that global warming could undermine that by undermining the water supply for the plants.

Mr. Gore offers a balanced proposal on population. He acknowledges that some more affluent populations are not replacing themselves and dependent on more fecund immigrant minorities (that could lead to political instability, particularly in Europe – the supposed “demographic winter” problem described by Phillip Longman [“The Empty Cradle”] and others), the thinks that stable population depends on the proper empowerment of women (p 228), including the belief that their children will survive. An aging population is not a “problem” if people can work longer, the economy supports their employment, and if medicine and lifestyle changes keep the elderly out of disability. That seems a bit optimistic. Mr. Gore mentions the western style safety net to care for the elderly, as if to trivialize it, and then talks about cultural traditions in poorer societies (without the safety net) that encourage large families, partly to have children to care for parents. But the severity of the demographic problem in the West is rapidly increasing, and it’s surprising that Mr. Gore doesn’t acknowledge that, given the health care and Medicare debate.

Al Gore's blog entry for the book is here.
Posted by Bill Boushka at 7:10 PM