Life After Death: The Evidence 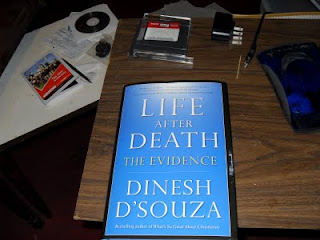 I recall, in the fall of 1958, in sophomore English at Washington-Lee High School in Arlington, that a (female) classmate wrote a theme in which she tried to prove the existence of God. She got an A on the theme (I don’t remember what my choice was for that assignment).

That long memory trace popped up into my mind when I heard about Dinesh D’Souza’s new book “Life After Death: The Evidence” from the (“conservative”) Regnery Publishing Company in Washington DC, 2009, ISBN 978-1-59698-099-0, 267 pages, hardcover, with a garish blue dust jacket.

The most striking piece of “evidence”, for my money, comes from general relativity, and the evidence today that there are up to eleven dimensions, seven of which are out of sight (since we live in “space-time” in our Universe). These dimensions might be accessible through “branes” linked to subatomic quantum-like particles, perhaps inside black holes. Perhaps the existence of "dark matter" and "dark energy" corresponds to these normally unreconciled dimensions. But their very existence gives a Deity an opportunity to “construct” (not needing a sharp-point compass or protractor) lots of other Universes to house versions of an Afterlife. Indeed, Clive Barker had toyed with a theory of all this with his Five Dominions (the First was essentially the Afterlife amd the Fifth was ours) in his epic 1991 “Chinese puzzle” novel “Imajica”. (D'Souza does offer discussion of "near-death" experiences but this does not really add much to his argument.)

Quantum theory maps out to the duality of mind and matter, and to the paradoxes we get into when we account for the Universe being the way it is and our planet’s being exactly right for life (and particularly Ben Stein’s exploration of Intelligent Design in the movie “Expelled”). That’s the “Anthropic Principle” perhaps, lending on a number of factors (our large Moon, Jupiter, the properties or water, etc) making our Blue Planet Earth just right (means we’d better take care of it).

This gets to be elaborated into what sound like a conservative’s view of New Age theory about spirit, self, mind, the group, etc. D’Souza takes us through a thorough philosophy of morality (or a blueprint that he would call a teleology), particularly an interesting idea of “selfishness” at the genetic, rather than individual, level. That explains some self-sacrifice (and it certainly explains “conservative” notions of “family values”) , but “evolution” cannot easily deal with higher order altruism expected in Gospel-style Christianity.

Here, I feel tempted to digress into my own area. D’Souza does not delve into gay issues (other than one metaphoric humorous oxymoron “zombie pride”), but in my own experience I can relate to replacing “genetic selfishness” (otherwise I would want to procreate and have a lineage to provide vicarious immortality) with “mind selfishness” in which a “legacy” of intellectual property (be it music or writings, all with ideological influence as to bearing on right and wrong) lives on. This can become boorish, whereas living “real life” is replaced by kibitzing the emotions of others. For me, the worst psychological horror is to be coerced into joining into the cultural causes defined by others regardless of my own view of the "morality" of these causes, and wind up being part of their group asking for help in a group manner. Yet, jumping ahead, Christianity (even compared to other religions) seems to demand some suspension of one's own judgment of right and wrong. Call it "pride" if you like, or even "the knowledge of good and evil."

Generally, higher moral notions (and the propagation of the “noumenal” part of us) do relate to various conceptions of an afterlife, even in agnostic or atheistic conceptions by philosophers such as Schopenhauer. Ultimately, D’Souza explains how Christianity is “different” with its notion of grace, which replaces almost completely the idea that one can earn one’s own salvation with works or good karma in the usual sense. D’Souza speculates on what Hell and Heaven would look like, with a degree of Hollywood imagination (I suspect he’s read “Imajica”, and perhaps seen some films like “Wristcutters”). D'Souza, on p. 228, offers an odd comment, "Some humans may be better than others, but the differences aren't enough to make a difference." Maybe we need Grace because a progression of Life is impossible if it must adhere to absolute justice at an individual level; Life by definition, out of its dualistic biological processes, must be "unfair."

D'Souza does admit that reincarnation is possible but, in his opinion, not probable. (Here he certainly digresses from Rosicurcianism.) He describes eartlhy death as the "termination of experience" which he believes would not really happen given the deeper laws of modern physics.

In 2002, I read (and reviewed on doaskdotell.com) an earlier book by D’Souza, “What’s So Great About America?” (again, Regnery). I seem to recall a metaphor or example about a “Starbucks Guy” and a concept of “authentication” by which one establishes that one’s work has some real worth to others.

The seven unused dimensions (11 minus 4, including time) might correspond to the seven heavens, and seven doors in Hell is the Islamic version of the afterlife (see "religion facts" here; the Bridge across Hell (probably inside a black hole) would look great in a movie). It's like your life is a test and you get a final exam grade, determining where you will go; your karma points get added up.
Posted by Bill Boushka at 7:29 PM