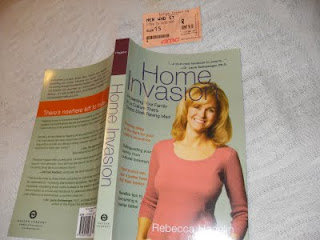 Rebecca Hagelin writes a regular column about “family values” in The Washington Times, and a recent column questioned why we aren’t committed to edifying traditional marriage and also recommended her book “30 Ways in 30 Days to Save Your Family,” from Regnery, a well known publisher of conservative books. I looked, and saw this more recent book from Thomas Nelson Current, ISBN 978-1-59555-283-9, 266 pages, paper, and the title is “con moto” metaphoric: “Home Invasion: Protecting You Family In a Culture That’s Gone Stark Raving Mad”. The cover also includes the phrase “cultural terrorism.”

Okay, I finished this one while waiting for “The Men Who Stare at Goats” at an upscale mall AMC Theater, probably not far from where she lives (Tysons), and included a picture of the ticket stub to make one point. She doesn’t like the distraction that the media throws at families trying to raise their kids. And that’s an understatement. (She probably wouldn’t like this particular movie.)

In September, I reviewed Allan Carlson’s “The Natural Family: A Manifesto”, and although this new book has a similar message, I wouldn’t call it a manifesto; it doesn’t read down from “on high”. Instead, with a bit of a paradigm flip from Carlson, this new book presumes that most adults really want families and a lineage but finds our modern corporate media culture a horrific distraction. Yes, tangentially she mentions homosexuality and gay marriage as negative influences, without giving much “logic” in an explanation. In fact, normal people with normal families have to run for the covers because of too much inward-focus, encouraged by commercial, secular culture. Most of her "moral" values are based on "God's rules" and don't seek deep intellectual rationalizations.

Hagelin is specific in some areas. She writes vividly how she was stranded in Little Rock on 9/11, and how that was a wakeup call, that American individualists cannot continue to live according to an unsustainable paradigm. In her last chapter she makes what is probably one of her “30 Ways” – for a wife to ask her husband to become a sole breadwinner. Laura Schleshinger has suggested that. But this sort of thing spreads to affect men who never did have children at all: they might be expected to become providers for others, especially given the rapidly escalating eldercare crisis.

Again, that little conjunction “If…” makes all the difference. If you have children, you should be in a monogamous marriage (I’ll leave aside the same-sex question), and you have to put them first. True, teenagers should not be overwhelmed with sexual messages; they should focus on their schoolwork, sports, and life skills. True, people from non-functioning families do more drugs and have more teen pregnancies. No argument there.

But what if you don’t have children? The Carlson book took on that question more directly, perhaps, although then not even that directly. But an obvious inference of Hagelin is that people whose lives center on the abstractions of media or other instrumentalities of the expressive work world and who do not pay attention to people may be burdening those who do have children and who do try to maintain traditional families. The “modern world” with its communications technology and other infrastructures did provide someone like me (however “schizoid”) the opportunity to live a rewarding “alternate” life, but one which maintains extreme interpersonal selectivity (along with upward affiliation), and which denies offering people unwelcome emotion or attachments. I could go on here, and will elsewhere; it gets existential, but there is the gut reaction that some kinds of interpersonal situations (maybe demanded of me by others) do not “deserve” my emotions, much less sexual interest, long term or otherwise. Of course, this “modern world” may be more fragile than we could have imagined fifteen years ago. Of course, the "Introvert Advantage" dependent on technology can be taken away by external events.

I could step into the literay agent world (I've worked with them) and say, if you're going to write and publish a book like this, at least cover all the bases. What are the "rules of engagement" for people who find some path in life other than having children (or taking vows of poverty)? (Carlson may come closer to doing this.) Maybe some people won't like your proposal, but make them anyway if you speak about this at all.
Posted by Bill Boushka at 5:55 PM