Bruce Bartlett's "The New American Economy": the end of Reaganomics? 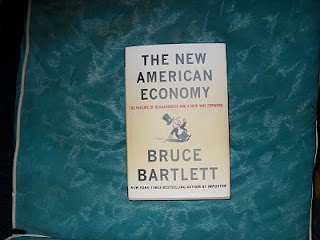 In his Introduction, Bartlett relates how he got fired from his job in a conservative think tank for writing a book, published by Doubleday in 2006, “Imposter: How George W. Bush Bankrupted America and Betrayed the Reagan Legacy”.

Bartlett gives a lot of historical technical explanations of both Keynesian economics, where government spending is sometimes necessary to dig an economy of the rut (as with TARP and all the Obama economic stimulus), supply side economics (Reagan), and various systems around the world, such as progressive consumption taxes, and VAT’s (value added taxes), popular in Europe, which he thinks the US needs to consider seriously now as a way of filling in its fiscal hole. He gives a lot of detailed explanations as to what happened in the Great Depression, Laffer Curve, the New Deal, the 50s and 60s, both deflation and inflation, the stagflation of the 70s, Reagan’s “morning” with the deficits (and Reagan actually increased some taxes!), Clinton’s fiscal conservatism, and George W. Bush’s general recklessness. Yes, to me, Bartlett sounds like a Democrat now, maybe even a liberal. He discounts the idea of “starving the beast”.

Particularly disturbing is his analysis of Social Security and Medicare, near the end of the book. Although Social Security is structured to look like an annuity (based largely on what a worker and/or his or her legal spouse earned while working), it really is much more of a “welfare program” for the elderly (regardless of need) than many people realize, partly because of the way it started during the FDR years. Libertarians (or libertarian conservatives) like to propose solving these problems with totally privatized pre-tax retirement and health savings accounts, with the idea that people should take care of themselves and not depend on either government or their adult kids. Of course, it’s difficult to switch to this system partly because of the welfare component and because, (to greatly oversimplify here), at an individual level “life is not fair.”

From a societal viewpoint, social conservatives have a point when they say that entitlement programs help break up families and when they say that social contracts need to be redesigned so that they give families more authority in mandating responsibility among their own adult members, especially those who do not have their own children (the “demographic winter” argument, which Bartlett does not get into in this book, but which seems to follow logically from the concerns that he does raise – he does mention a proposal that consumption taxes could help fund not only Medicare but even long term care insurance, as is being tried in some countries like Germany and Japan). The only way out of this (and the authoritarianism that it could invite) is to carefully analyze what it takes for adults to really be able to take care of themselves. Along these aims, it is not necessarily wrong to believe that some public goods (even health care and some aspects of public transportation, as in Europe) can be funded efficiently with consumption taxes, and it is possible to design consumption taxes so they are not regressive.

Bartlett also raises some red-flag warnings about how much of our debt is held overseas by investors in countries like China, and admits that by normal standards of creditworthiness, the U.S. seems to rank very low now, having squandered the savings built up in the Clinton years.
Posted by Bill Boushka at 8:00 PM

As long as people vote democratic or republican, things will never change in this country and our quality of life will
continue to degrade.

As you know, the media and other controlling sources make us think that we only have two choices for
the presidency in our nation.

We need real change and to get our nation off of the oil and corrupt pharmaceutical industry standard. Please review our
website, contact us with any questions or comments, and help us anyway you can.