The End of the World as We "Knew" It

Googled: The End of the World As We Know It 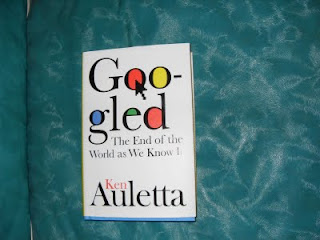 Back in 2001, after coming home from seeing the first “Lord of the Rings” film, I got an unexpected email from an acquaintance who asked me to take down any reference to him in a particular posting on my website. It was a small matter. But in the ensuing conversation, he mentioned that before he dates anyone, he “googles” their name.

It came as a surprise to me that the “Company” did not come into legal existence until the fall of 1998. In fact, Congress had already passed COPA, and soon I would become a plaintiff (sponsored by EFF). I would be asked to supply page view counts, and one thing I discovered is that they increased very rapidly starting in late 1998, as I got indexed into what would become the largest and most popular search engine.

Auletta spends a lot of the early part on the book on the idea of revolutionary innovation, of being the next teenager in a garage to come up with something to tear down whole industries. Page and Brin were already out of grad school, so the birth of The Company is not quite so shocking (Auletta covers the details), but the concept of “copying down” all the links on the Internet as it was in the mid 1990s was revolutionary, but perhaps no more so than other things going on (such as Shawn Fanning’s single-handed invention of Napster in the late 90s). There were other search engines, but Page, Brin and others brought their mathematical bent to develop a way to model “the wisdom of the masses”, coming up with a search technique that would lend itself to monetization, and a revolution more in the concept of how to run the whole world of advertising than anuthi

While tracing the “childhood” and “adolescence” of The Company, Auletta analyzes the “existential threats” to established media industries pretty thoroughly.

Particularly interesting is the guarded reaction of the book publishing industry, and of established authors, not only to the book project, but to the whole concept that writers expect their work to be found online and “scoped” rather than read leisurely (or studied carefully) after being paid for. The problem gets complex: some book publishers offer new authors “print on demand”, and “vanity publishing”, to develop a presence in the limelight, becomes much enabled.

But that possibility links up with concerns that Auletta raises at the very end, about the prospect for stricter government regulation, especially overseas, as many cultures consider “the community” more important than “the individual.” For example, one could then posit the moral question: if one stakes a position in the limelight, should one first have to be accountable for and to others? That can turn the whole paradigm of “personal responsibility” (for which so much of the Internet, where consequences occur retrospectively) upside down, perhaps Confucian style. (To get a rein on individual vanity and encourage social connectedness LDS or Amish style, one could suggest that an online book be allowed to remain available only if it does make reportable income!)

Auletta does mention the problem of online reputation, which boils down to the fact that anyone can publish anything and the whole world will find it quickly, especially when the material is made available to search engines. But the world of social networking makes the question more complicated: not only just with the issue of privacy controls (and trust in major companies), but with the whole purpose of being online: it’s socializing, it’s publishing, it’s everything. Auletta tangentially gives short histories of Myspace and Facebook, too.

There is something about “The Company” that regards itself as a super-utility, building on the content of users. Older media companies were predicated not only on the notion that “content is king”, but that content goes through supervision and review before it is “published”. (Auletta provides a lot of constructive criticism of the traditional newspaper business.) That it became permissible to dismiss the oversight component may seem like the fortune of history now, although much of it is embedded in Section 230 and in the DMCA safe harbor, a concept that the author doesn’t get into. We should not take things for granted so easily.
Posted by Bill Boushka at 4:30 PM