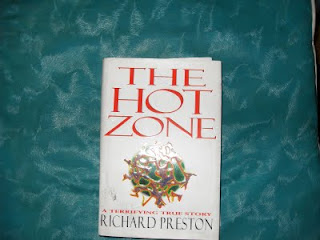 It isn’t real often that I pick out older books to talk about on this blog, but in the drawdown period from H1N1, Robert Preston’s 1994 book “The Hot Zone: A Terrifying True Story” from Random House (ISBN 0-679-43094-6) makes a curious subject matter. I bought it at a book fair for about $1 at a book fair at work in the cafeteria in 1995.

Of course, we know that it is like a “non-fiction” novel about the Marburg and even deadlier Ebola virus. The latter chapters account for an incident where a supposedly airborne form of Ebola almost escaped from an Army conveyance into Reston, VA in 1987. Generally these viral hemorrhagic fever (VHF)’s of the filovirus family are transmissible only through “body fluids” but the infections are much more transmissible than HIV in practice.

But the book is written in intriguing style, starting with a cave expedition (in the Kitum Cave) near Kenya’s Mount Elgon, with a local whose disease will start with a bizarre headache.

A massive companion volume is Laurie Garrett, "Coming Plague: Newly Emerging Diseases in a World Out of Balance" (1994, Penguin, ISBN 0140250913). This volume gives graphic accounts of Lassa fever, Marburg, Ebola --and, of course, HIV. The blow-by-blow account of an explorer who recovered from the liquefying effects of Ebola but developed universal alopecia in the process is particularly striking.

The germs in the natural world are probably a greater practical threat than anything man can make up in a lab. As for a vaccine on H5N1, we’d better get cooking.

Preston's book would make a great movie. I don't think it's been done.
Posted by Bill Boushka at 5:50 PM