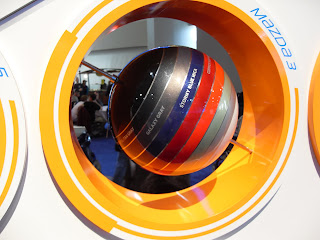 Some publishers , such as Scribner for Stephen King’s “Under the Dome” (link to author’s video (link) wait for several weeks before releasing an e-book. (Does the book remind one of “The Truman Show?”) Scholastic, publisher of J.K. Rowling’s Harry Potter series (franchise -- kids like them!) has avoided e-book release altogether so far.

But Dan Brown’s “The Lost Symbol” (Doubleday) was release in Kindle at the same time as in print, and wound up quickly in BitTorrent. There is a derivative work by Stephen Cox, “Decoding The Lost Symbol”.

The piracy problem is confounded by the fact that sometimes new authors may “give work away” on line in order to develop an audience, especially for novel nonfiction material.

Another problem is that old books, except for the top bestsellers (usually fiction) tend to drop off in popularity quickly as residuals become available from resellers. I got a call from iUniverse Dec. 23 about my own “Do Ask Do Tell” books regarding advertising campaigns, and indicated that I did not think they could be effective for old non-fiction (dating to 1997). I am working on a new book, a novel, now, but so far relatively secretly (a few preview comments on my blogs). It has to be “as good as it gets” to break the market. It was to be called “Brothers” but Lionsgate used that for an unrelated movie so I am also considering “Tribunal and Rapture”.
Posted by Bill Boushka at 3:25 PM