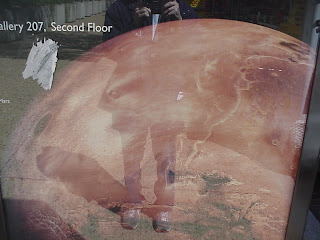 On p. 30 there is a brief presentation of “The Big Idea” showing in pictures how terraforming of Mars could take place over at least a millennium. Carbon dioxide from soil and the polar ice caps of dry ice could, if released, create “global warming” and raise temperatures while settlers like in habitation modules. Eventually photosynthetic plants could develop, maybe forests. Daytime temperatures on some of the planet would be 40-50 degrees F, about like the Northwest Territories in Canada in June. But the atmosphere would remain oxygen poor; people would have to wear “scuba gear” to go outside of their insulated homes.

Over thousands of years, people would change biologically under less gravity, maybe becoming a distinct species with the same intelligence, resulting in political issues.

Mars would eventually lose its terraformed atmosphere over many more millions of years because of evaporation, low gravity, and lack of a magnetic field. So the habitability of Mars will not outlast that of Earth when the Sun expands into a red giant in 4 billion years.

The issue also has an important article “The Polygamists: An Exclusive Look Inside the FLDS, by Scott Anderson. “If you have men marrying 20, 30, up to 80 or more women, it’s simple math that there will be a lot of men who aren’t going to get wives.” They become the castoffs, in a system that rejects western civilization’s rule of “one per customer” (as George Gilder put it in his 1986 book “Men and Marriage”) in monogamous marriage, so everyone has a chance.

The link for the issue is here.

I visited Colorado City, AZ in October 1987, and visited the Reformed LDS and Temple Mount in the Kansas City/Independence areas in 1982.
Posted by Bill Boushka at 5:13 PM