Carley: "Asperger's from the Inside Out" (2008): now timely due to a possible APA change

Asperger's From the Inside Out: A Supportive and Practical Guide for Anyone with Asperger's Syndrome 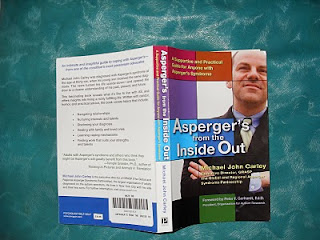 Author: Michael John Carley
Title: "Asperger’s from the Inside Out: A Supportive and Practical Guide for Anyone with Asperger’s Syndrome"
Publication: Perigree, 2008. 252 pages, paper. ISBN 978-0-399-53397-6; Introduction and 7 chapters.

The author is Executive Director of GRASP, the Global and Regional Asperger Syndrone Partnership.

The author has led an adventurous life, as he relates in his Introduction when he relates a brief account of his work in Iraq on a water project, and how a particular incident would lead to his evaluation and diagnosis.

The book may attract some attention now since the American Psychiatric Association is considering formally placing Asperger’s Syndrome within the Autism Spectrum Disorders.

However, the author opens Chapter 1 by writing “Asperger’s syndrome is a neurological condition. It is one of five diagnoses that comprise what’s called “the autism spectrum”. (“Comprise” should be “constitute”.) Other sources list the Big Five as “pervasive developmental disorders.” The classification will be controversial, because it would define as autistic some individuals who would not view themselves as sick or disabled. The author also uses the abbreviation “NT” for “neuro-typicals”, or “normal” (I hate to use the word) people.

The main point, however, is to understand what, in biological terms, an autism spectrum “disorder” is. I think one way to see it is to consider how other familiar mammals behave. We all know that most cats are very different from most dogs in that cats are “selfish” or independent, whereas dogs are sociable and loyal to masters and packs. (In fact, there is a booklet by Kathy Hoopman, “All Cats Have Asperger Syndrome”, just 72 pages, from Jessica Kingsley Publishers, 2006). That is to say, our brains seem to have wiring both for our abilities to perceive ourselves as and act as individuals, and to share identities with a group (especially a nuclear and extended family) and act primarily as a member of a group in a manner appropriate for the role in the group. We know that elsewhere in biology this concept is even more hard-wired: look at social insects (ants and bees). Given the environment, both “selfishness” and “sociability” may give the animal a reproductive advantage and be passed on as hard-wired neurological traits in genes.

In a sense, “full-blown” autism sounds like “hyper selfishness” – to the point that the individual cannot communicate and may not want to. This may sound judgmental, but it is not; it helps us understand what we are dealing with for individuals who do function reasonably or very well, but who are “different” socially. At one end of the “increased selfishness” spectrum there is increased intellectual focus or other artistic focus, sometimes found with “creative” artists (music composers, painters, poets, novelists) or particularly scientists and mathematicians, and probably many grand master chess players. An individual who merely manages his “social” life adequately makes a living off his ability and does well in life. But quickly the prospect deteriorates; the individual is unable to understand non-verbal communications, then grasp the norms of expected behavior, and then further down, communicate in an acceptable manner at all.

The author gives a useful chart of Asperger-related behaviors, and shows how they can usually have positive as well as negative interpretations. Some that I relate to include interrupting others (a big problem in grade school starting mysteriously in third grade), a tendency to monopolize things on one subject, sometimes a tendency to make insensitive remarks because of an overly literal interpretation of circumstances, and a tendency toward absent-mindedness (which is really not the same thing as a short-term memory deficit). The latter is interesting: on my first job at National Bureau of Standards in 1963, by boss thought I had a “bad memory” but the problem was not keeping my mind on what I was doing. But the individual learns, even from an individualistic perspective, that some accommodation to social norms is required. The “rights of others” (to consent) demands, for example, that we not make unwelcome advances. A civil workplace requires that we not make certain kinds of remarks, and the barrier has gotten higher as times have changed, partly because of our social history over the past few decades. Other social norms (such as those against nudity) may have a more collective meaning, which may be hard to grasp from an individualistic perspective without specific learning.

Carley talks about getting evaluated and then “coming out” (one chapter is called “Disclosure”). My own take would be, if you are doing all right as an adult, there is no need for a formal evaluation or disclosure. But sometimes the outside world comes knocking at the door and demands things of a person that it had not demanded before. That is somewhat an issue in my own life.

I remember sitting down to dinner with an independent film producer at a Friday’s in Providence, R.I. in 2003, when he noticed by subnormal body language and blurted out to me that I have Asperger’s Syndrome (too). At age 60, that was my first diagnosis.

It's possible that Asperger's might develop because some motor facilities in the central nervous system just run too slow, like a slow computer chip. That would allow contemplative abilities to become dominant. Or maybe it's the other way around.

I wonder what the relation of Asperger’s is to “schizoid personality disorder” (which was my official diagnosis at NIH in 1962), which, again, is defined relative to society’s expectations to fit into the group. (Narcissistic personality disorder and sociopathy are much more problematic. I do experience a reluctance to share the gratuitous emotions of a group, whether in a “fellowship” or in a family – I see all this concern over lineage and family as the “soap opera syndrome” (“Days of our Lives” – aka Sami’s story – is the worst offender.) I am sometimes perceived as both unsympathetic and unempathetic – these are different concepts, as the author points out. I do have my own personal access to emotion – in short, it is through the gateway of music. The lack of “social emotion” or the ability to “love people as people” can become problematic as families get smaller and the demands for eldercare or care for people with other disabilities (besides ASD) increase because of changes in medical practice, in short, because of “demographic winter”.

The author is married with two sons. But some people with Asperger’s do not marry and do not desire an intense relationship. It’s logical to wonder if there is any connection to homosexuality, at least on theory; but plenty of people with Asperger’s express heterosexual interest. Conversely, many, maybe most, male homosexuals are “neurotypical”. For example, in Hollywood there are many gay actors, and they probably could not succeed without relatively “normal” social instincts and even charisma. On the other hand, artists and computer nerds (gay or straight) may not need the same kind of social ease. But the question is interesting: since there is so much evidence that sexual orientation also has roots in biological wiring and perhaps both genetic and prenatal hormonal influences, is there any cross-connection with autism-spectrum disorders at the biological wiring level?
Posted by Bill Boushka at 3:57 PM