Comeback America: Turning the Country Around and Restoring Fiscal Responsibility 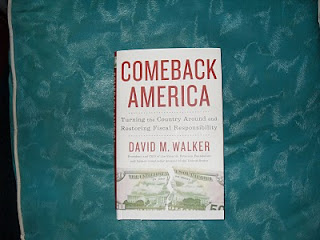 Fareed Zakaria recommended this book as a brisk read at the end of a recent Sunday Global Public Square program on CNN.

The author served as the seventh Comptroller General of the United States (under Reagan and the first president Bush) and headed the Government Accountability Office from 1998- to 2008. Today he is president and CEO of the Peter G. Peterson Foundation, with link here.

The author presents his theme of bringing our nation back to living within its means with a tone of compassionate conservatism, and sometimes shows recognition even a limited government must help people share some responsibilities for each other.

The most “radical” part of the book is probably the last chapter (“Fixing our Dysfunctional Democracy”), where he suggests using the second (so far never used) method for initiating a constitutional convention to amend the constitution, with 2/3 of state legislators calling for a convention. He makes some flexible proposals dealing with the Electoral College besides just doing away with it. He also addresses term limits and campaign finance reform and partisanship and overuse of lobbying. (I can recommend the book Vile, John R. "Contemporary Questions Surrounding the Constitutional Amending Process" (1993) from British publisher Praeger.)

But probably the most challenging portions of the book are his middle chapters with specifics on Social Security and health care. He describes how Social Security is “balanced” it a hidden accounting trick involving “off the books” IOUs locked up in West Virginia (I hope not at the Greenbrier!). Besides gradually raising retirement ages, he does suggest some means testing of benefits, especially against current outside income. (In fact, Social Security has an Annual Earnings Test for early retirement until full retirement age is reached, but he would apparently extend that concept.) Now, I personally experience Social Security benefits as a legally-driven annuity, related more or less to my FICA tax contributions over more than enough qualifying quarters. (Let me recommend Tomkiel, Stanley A., III "The Social Security Handbook": 4th Edition (2004, Sphinx). However, Social Security was originally invented (during the FDR years) as a quasi-welfare program intended to protect less fortunate aged people from poverty; there was always an element of wealth redistribution in the concept, so that early beneficiaries during the 1930s and 1940s never had to contribute. Social Security is often depicted as a promised "entitlement" (as is Medicare coverage); I still tend to see it as significantly covered by my own contributions. Yes, I personally would like to see a switch-over to a privatized lifetime annuity savings system.

Walker also has a comprehensive recommendation for health care reform. He supports limited catastrophic insurance coverage as universal coverage, and then offering supplementary coverage on an exchange, across state lines (pretty much along GOP lines), but with care not to allow the supplementaries penalize people for pre-existing conditions. But he does also recommend emphasis on healthful lifestyles and prevention (on smoking and obesity; he doesn’t mention STD’s). He recommends a “Medical Fed” separated from the political process to make decisions about appropriate care, and gradually disbanding the “fee for service” system which he correctly says enormously runs up the cost of health care for even relatively minor problems. He thinks that pharmaceutical companies should not be allowed to advertise in the media.

On tax reform, he suggests increasing consumption and VAT taxes, and argues that they do not have to be regressive. He is a bit equivocal on inheritance taxes, and perhaps even on the social "morality" of inherited wealth.

On defense, he suggests that America should operate overseas only when Congress declares war (not practical with clandestine Special Forces operations), and that Congress should levy a surtax to pay for the war (as LBJ did during Vietnam). He believes that the 2001 operation in Afghanistan was an appropriate reaction to 9/11, but that the war in Iraq to depose Saddam Hussein was not. He discusses the inequality of sacrifice during war, but never comes out to call for resumption of the draft. I think he would privately support an almost mandatory national service requirement, and would probably agree that “don’t ask don’t tell” should go, although he never specifically get to that issue.
Posted by Bill Boushka at 6:59 AM