Jaron Lanier's "Manifesto": "You Are Not a Gadget" (and neither am I!)

You Are Not a Gadget: A Manifesto 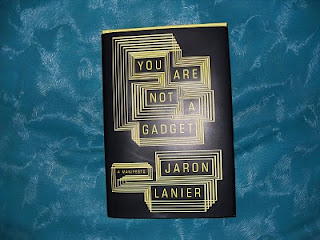 The author is known for founding VPL Research and popularizing the term “virtual reality” in the 1980s, during a time when people imagined purchasing body suits in order to experience it. Indeed, one can experience being a cuttlefish, with extra limbs, and a totally different self-concept, a notion that the author covers late in the book. That was long before the Net and Second Life. Lanier is also a music composer (and performing pianist) with definite ideas about what makes music human, and definite theories about how the computer age has sent it into retrograde. One could look at my “dramas blog” and look at the “young composers” label there for comparison.

But most of this “manifesto” (again, we have another writer posting “The Manifesto” as a pronouncement from “on high”, perhaps a perjorative) is a well-intended “devils advocate playing” exercise in questioning how the modern Internet is affecting our experience of self-concept in relation to others.

The bluntest statement occurs early: “I want to say: You have to be somebody before you can share yourself” (in Preface p ix – and I wish books didn’t use roman numerals for preface page numbers – they should count).

Of course, there follows the basic “concern”: companies and “institutions” (if Wikipedia is such) are mashing up snippets of content, erasing individuality in the process, and, perhaps not so intentionally, introducing a new mechanism to enforce social conformity. I’ve already covered this at great length on my blogs with all the concerns about “online reputation defense” (mentioned on p 70 in the book) that have grown ever since social networking sites started to evolve around 2004. Likewise, the whole concept of privacy has metamorphized into something unrecognizable to our parents.

Lanier likes the style of earlier contributions on the Web, which were less likely to be anonymous and more original, often based on books (as was my first website in 1997). Gradually, however, people have lost interest in experiencing entire works (that is, reading entire books or even watching three hour movies) and get their content piecemeal, as amalgamated by software service companies, and presented to advertisers. The context problem complicates online reputation, of course.

Part of the problem is that structures for computing architectures evolve, sometimes by chance, into fixed forms that determine how people will interact with them. Lanier says that the structure of today's Internet was determined by Tim Berners-Lee, but it could have been different.

He discusses the “free content” problem, and combines it with the digital rights management issue with a novel proposal: ISP’s charge people in “unbundled” fashion for all the content that they access, and then pay the content providers, through some new mechanism (fractions of a penny per item, perhaps). But he often sounds pessimistic that the “brave new world” of the Internet offers entrepreneurial artists any real chance to make a living. I would disagree somewhat: the best and most creative will still tend to prevail. One of the reasons that "free content" has lasted is the legal structure that limits downstream liability (Section 230 and DMCA safe harbor).

He does present his arguments in an esoteric, sometimes existential manner. He talks early about the “Singularity” as if it were the “group mind” moment at the end of Arthur C. Clarke’s “Childhood’s End” (which still needs to become a movie, by the way). Perhaps it’s like a “Blackout” in the ABC series “Flash Forward”. Or maybe it’s like a dream that won’t stop in REM sleep – possibly a threat of life’s end if one can’t wake oneself up.

He discusses "trolls" (hiding behind anonymity) and the "Ideology of Violation" which attacks "security through obscurity" (akin to biodiversity in nature), where journalists or bloggers invent hypothetical threats and scare people into protecting against them (the media scare over bump keys and lock picking in 2007 makes a good example; but sometimes we really can harden ourselves against many of the threats, including cyberthreats).

He introduces many other theories, like “computationalism” which he says eventually becomes a kind of universal Turing Test. He also tells the tragic story of Alan Turing’s arrest in 1952 for homosexual acts in Britain (no longer a crime after 1967), his treatment by feminization and chemical castration, and his eventual suicide.

He also discusses the existential nature of information, as not having sentience (although the laws of thermodynamics and entropy makes one wonder; the whole subject gets us to the other unseen dimensions of cosmology).

All of this makes me ponder what it means to “become a person” in his mind. For decades we have thought that the work ethic could put us through: your work becomes a contribution for future generations, and it attracts the people you want, including spouses (straight or gay). The “mao-ism” of the Web (as he sees it) threatens that process, and brings up the socially conservative notion that one must be a social creature first to be a person, extending himself or herself to others based on need (personal socialism, call it), and able to start and keep a family (with progeny) through one’s proper socialization, none of which required a cyberspace. In fact, one can question whether “cyber friends” are that: one cannot reasonably have 700 friends in real space. Of course, without real relationships with others, when one talks too much, one can come across as a Pharisee!

The book is printed in scala, with some font changes to highlight sidebars.

Let me add, I disagree with the popular impression out there that this book maintains that the Internet is "destroying society."  (Note: the concerns about surveillance were already there in 2009!)
Posted by Bill Boushka at 5:33 PM