"The Trouble with Boys" by Peg Tyre (review)

The Trouble with Boys: A Surprising Report Card on Our Sons, Their Problems at School, and What Parents and Educators Must Do 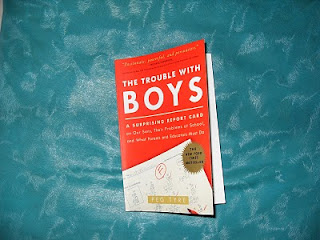 Title: "The Trouble with Boys: A Surprising Report Card on Our Sons, Their Problems at School, and What Parents and Educators Must Do"


I could have fun with the title of the book, because it reminds me of “The Trouble with Harry”. An reviewing a book on these blogs is a bit like watching a really independent film, and the subject matter of this book would make great material for a PBS Frontline show, I think.

I worked as a substitute teacher in northern Virginia for a while, doing about 240 assignments, and I can certainly say that some boys do succeed spectacularly, at everything: sports, academics, arts. I think back over my own piano lessons in the 50s, and more girls took piano than boys, but as I look at what goes on today, it seems there are more male composers than female, still, and some music and acting, in different ways, seem to make demands on “real men” – they always seem fit and strong (as long as they stay away from the bottle or drugs). A few weeks ago, Taylor Lautner, still 17, hosted Saturday Night Live. Yes, it’s quite remarkable that a young man, not yet a legal adult, is talented and mature enough to host a show like that. So some boys do very well. They always have.

In my senior year of high school, I joined the Science Honor Society (that was 1960-1961), and there was only one girl. In tournament chess, men have dominated, but in recent years women’s chess has grown and women write many columns in the USCF publications.

All of this loops back to a basic point: men and women are different, and the educational system of the 50s really did take that into account. Boys were allowed to be boys long enough to be ready for school, by and large, in middle class America. Through a series of changes related to gender equality and abstract educational theories, as well as some changes in the family itself (fewer stay-at-home moms, fewer and later kids) the early years of the educational system became harder on some boys, particularly some minorities and those whose parents have lower incomes.

Kindergarten, she pointed out, became the new first grade, and pre-schools and grade school alike placed unreasonable expectations on some boys, setting up a vicious cycle that sets them up for lifetime failure (after attempts at special education). The harder we try, it seems, the worse it gets.

Boys do play differently. Apart from competitive roughhousing, they like to set up domains in which there are places to go and things to happen. (Model railroading is still popular with many boys, and the attraction of many talented boys to computers is explained partly by the fact that computing gives them a world that they can manipulate. Yes, kids learn to code java in middle school; once, when I was subbing, an eleven year old sixth grader got me past a “blue screen” error with a complete safe mode reboot.)

The author does provide discussion of the biological differences between boys and girls (p. 182 is particularly interesting), even in starting in utero. She covers controversies like boys-only classes and the lack of male teachers in lower grades (because of income and "fear" of cultural stereotypes, about which she doesn't mince words). What I noticed is that participation in performing arts, whether music or standard drama (very different experiences in some ways) really seems to help boys develop cognitively. I don’t know what the scientific explanation is, but it seems very real to me.

Sometimes boys fall behind for other reasons; being behind physically can make some boys over-cautious and fearful of risks, leading to paradoxes. On p 252 she discusses the "double standards" we have for boys: we want them to be in charge and be independent, but we expect them to sacrifice themselves in war or serve the interests of the community. All of this was all too real to me.
Posted by Bill Boushka at 10:11 AM