The title of the book calls to mind the film “An American Haunting.” I feel flippant because I was astonished at the mass of theories presents. Ventura was governor of Minnesota from 1999 to 2003, and was considered both an Independent and a rep for the Reform Party. He was popular with the Libertarian Party of Minnesota during the days that I worked with them . He is level-headed and sensible, so at first glance this work sounds astonishing. Some of his other books are “I Ain’t Got Time to Bleed” and “Don’t Start the Revolution Without Me.”

The best way for me to launch a review of this book is to develop my own personal experience with some of the material he presents.

I remember the joyful “wake” in an Irish bar in St. Paul, MN on election night in November 1998, with friends from the LPMN. We broke out in cackles as Ventura pulled ahead. I had been impressed by the level of activism. An insurance professional had run for city council in Minneapolis (“basic services first” -- I remember the debates on loose shopping carts) and a college student (who would later launch my speech and cable television appearance on my own book) had run for council in St. Paul at something like age 21.

Flash forward three years, to a Saturday night late in September in 2001. Jesse Ventura, while governor, comes to the Human Rights Campaign dinner in Minneapolis. We have a chat (by then he probably knew me and my work on “don’t ask don’t tell”), and we talk about 9/11. He agrees with me that “It is safe to fly” now. There’s no hint of radical interpretations of all these “bad things” in his remarks.

Now, I flash back to about a week before 9/11, when I had moved into a larger apartment in the same downtown Minneapolis highrise. I celebrate Labor Day weekend by going up north, to Duluth gay pride, and stay in a motel in Wisconsin, unable to connect to my email. But Sunday night, in Thunder Bay, Canada, I connect to AOL, and I recall a bizarre email heading with “911” in the title. I figure it is sent by a virus and delete it. But several other friends of mine report getting a similar email, which had apparently arrived mid-day Saturday.

The day after Labor Day, back at work, I picked up a Popular Science issue in a drug store, an issue that talks about the possibility of local EMP attacks launched by terrorists with relatively cheap microwave generators. Another friend at work (rather much more of a techie and engineer than me) had seen it and is concerned. Later, the movie “Oceans 11” would have a plot incident based on the idea.

The last two days that week (Sept. 6 and 7), we had the largest (and really only) computer network virus infection ever at work. It was a big deal. I had a feeling something was going to happen. It had been a bizarre summer in some ways, and there was a sense something would happen.

So I dig Ventura’s imagination, at least. We needed more imagination, and we certainly need it now. But if the government (the old libertarian paranoia, perhaps) is the source of the plots rather than Al Qaeda, we’re pretty much sitting ducks.

Let me mention one more autobiographical oddity. I spent boyhood summers in a town of Kipton, Ohio, five miles west of Oberlin; and I was told by local sources that the flight 93 actually turned in that area and might have crashed a few miles NE of Kipton.

So I come back to the subject of “imagination” and I must say that Ventura states a lot of facts and theories. And he does provide beaucoup bibliographic references and endnotes. It would be quite a challenge to go through this book’s 14 chapters on different “incidents”.

On 9/11, he mentions some interesting records about the path of Flight 77, enough to suggest that something else (a missile) could have hit the Pentagon – and notes the lack of debris from Flight 93 and similar questions about its path and whether the government really would have shot it down in time to protect the Capitol if “Let’s Roll” hadn’t happened. Why was the government so slow to respond to the multiple attacks? He questions the usual theories that jet fuel fire could have caused the WTC towers to pancake in ten seconds, and analyzes the nearby Building 7 that collapsed. He recommends the “Loose Change” movie (reviewed on the “disaster movies” blog Oct. 1, 2009. One could ask questions about why FBI Agent John O'Neill was "allowed" to go to work for the Port Authority and WTC Security Operations and be in the towers on 9/11, his first day of work on a new job, to die, as in a PBS Frontline documentary (link, near the end). One should also ask why Zacarias Moussaoui's laptop wasn't examined by the FBI (he was nabbed in Minnesota in flight training, remember), or about FBI agent Coleen Rowley whose warnings were ignored (I believe I met her in a coffee line on the Skyway underneath the Minneapolis 111 Building once), or about the NSA's intercepting a message (like the mysterious email above) on 9/10 and not looking at it until 9/12. By the way, there were mysterious arrests in Boston on 9/12 that the media reported but never followed up on.

Ventura's most convincing chapters concern the stolen election(s). It’s true that voting software is vulnerable to manipulation. I’ve worked as an election judge three times in northern VA, and found the procedures (with the machines from Advanced Voting Solutions, with no paper trail) strict enough – we were kept there for 18 hour days with low pay. In Minnesota we had voted with punched cards that could be counted, so there was a paper trail. He mentions, in discussion of the 2004 election, the subjects of draft dodging and combat heroism in Vietnam, somewhat in departure from his libertarian leanings. He also suggests that one official who “knew to much” may have been murdered by having an microwave EMP blast fired at a private plane he was in. That’s the old but obscure Popular Science article again. The Washington Times has also discussed the EMP problem in some op-ed columns (see my International Issues blog).

On the Collapse of 2008, his work more or less parallels the writings of Michael Lewis (“The Big Short”, which I haven’t personally looked at yet but saw summarized on 60 minutes – see my TV blog for March 15). True, AIG and Goldman-Sachs were artificial.

Ventura "comes out" for ending the war on drugs in his chapter on the Iran-contra affair.

On other materials, he really gets interesting. On the JFK assassination, he presents the theory of a double for Oswald, which sounds reasonable. On Watergate, he supposes that Nixon wasn’t so bad himself but that he was set up, with a Watergate burglary intended to fail and “get caught”. He explores the idea of a “Manchurian candidate” style mind control black ops in the CIA, particularly with the RFK assassination and possible programming of Sirhan. He talks about Lincoln’s end as a wide-netted plot not covered in history books, and mentions the possibility of biological warfare (with yellow fever) in the Civil War (let alone smallpox in the Revolutionary and French and Indian Wars). He presents some evidence that Jonestown was actually underwritten by the CIA, with almost all the residents actually murdered.

One can only say, wow. In his last chapter, he warns about the extent that government can go to, declaring martial law and shutting down communication on the Internet at a whim. This is no “duck and cover”. I remember the concerns right after 9/11 about the web and steganography, and the idea that ordinary people’s sites could be hacked with steganographic instructions. In fact, on an old site of mine, a file was hacked right at the point where I started talking about suitcase nukes. Who was trying to send me a message.

The Alex Jones Channel offers a perspective on the book (and Ventura's TV shows and "True TV"):

Jones calls this Ventura's "best books" and speaks of government crimes himself.

There were at least two "hit man" killings of people working on highly sensitive government projects in the Maryland suburbs of DC in late 2008, in one case leaving bizarre clues on social networking sites; one wonders if Ventura's theories could apply to these cases. The governmnet did it? 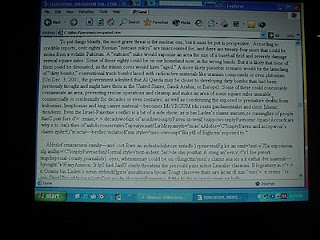 nice blog check out mine http://nibiruplanetx.blogspot.com/