Jim Wallis: "Rediscovering Values": a call for more sociability? What about introverts?

Rediscovering Values: On Wall Street, Main Street, and Your Street 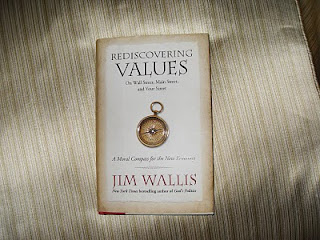 On page 56, Wallis writes, “The problem comes when ‘I am special” turns into ‘I am an exception.’ When ‘I believe in myself’ becomes ‘I do not believe in others.”” I would react by saying, “I believe in some others, but I must have the freedom to select those others.” I remember an episode of WB’s “Smallville” where teenage Clark Kent says, “I’m different, not special.”

I’m getting ahead of myself, here. I’ll come back to the personal reaction. This book was mentioned in a recent issue of the AARP Magazine, and purports to be an interdenominational examination of our values, of what we should be living for as we come out of the Great Recession. You could say that he combines George Soros's criticism of "market fundamentalism" with a religious suspicion of hyperindividualism. In a sum, it seems that we are no longer sufficiently social (or sociable) creatures. (On p. 63 there is a section “We are social creatures” in the chapter “It’s all about me”.) We need to learn to live for purposes greater than ourselves. (John McCain has said that.) We need not so much a social contract as a social “covenant”. But, in this author’s view, the issue is much bigger than the loss of the focus on “family”, even if it should not remain so nebulous as "the common good". In fact, Wallis stays away from characterizations of the “natural family” (a book by Carlson that I reviewed in September 2009) and the divisive social issues that result (like gay rights) and keeps things pretty general. His thinking is a bit like Rick Warren’s “it’s not about you” or the “Purpose-Driven Life”. Of course, this can lead to loss of individual choice or freedom as we normally see it today (loss of “personal autonomy” or “individual sovereignty”) and can invite corruption from those who do wind up in command of the social structures.

It's important to note that Wallis points out that we need to learn to ask the right questions. Are we talking about accepting the importance of loyalty to family and community in a way to cover sacrifice, or are we talking about "rules of engagement" that keep the veneer of individualism while addressing "sustainability"? We like to get rid of "double standards" but doing so explicitly (getting rid of "don't ask don't tell"-style thinking completely) can result in loss of freedom for everyone. There's no way a society can make things absolutely "equal" and "fair" for everyone (as we often expect it) and preserve freedom as we experience it. That probably explains some of the "socialism" of most religious teachings.

Wallis's perception of Wall Street is pretty straightforward: financial practice got separated from contact with the customer. Banking entered the world of abstraction, with the packaging of securities into bundles (“derivatives”) that had nothing to do with people. The motive was short term profit and a particularly simplistic, Hollywood-ish idea of “greed” (perhaps not even the enlightened self-interest of reputable objectivism). Generally, big business became more consolidated and disregarded the needs of its workers (here he sounds like he comes from the Left). As a result, families tended to be hit harder by the uncertainties of the workplace than did single or childless people, and young adults felt discouraged to take on personal responsibility for others. In my view, the eldercare demographic crisis can change this quickly.

But it’s how we look at individual people that matters. A culture of hyper-individualism replaced the solidarity of earlier generations, with a view that the poor or vulnerable are personally responsible for their own plight. (One can ask that question of borrowers of subprime mortgages when they later defaulted; was this "getting something for nothing", or an inevitable consequence of taking on family responsibility, which cuts both ways when it comes to materialism.) Not so, he says: people don't start out at the same place in line, and God never intended that invidivuals completely control their own fates; all major religions have a tradition of accepting the reality that some poverty is unavoidable. He compares the socialism of the early Christians to that of Shariah law and the Muslim practice of forbidding usury, which in some cases leads to financial practices in home ownership that are more sustainable. He also discusses periodic redistribution of land or wealth in Jewish law in the Old Testament. (I think that the Parable of the Vineyards provides an interesting paradox, as does the Parable of the Talents.)

One interesting notion is "moral hazard" as he defines it. That is, someone keeps the gains, but vanishes from the planet before the house of cards falls. That again is a "generativity" problem. He does mention fatherhood as giving him a sense of futurity.

But it’s how the individual himself or herself should behave – and interact with other people – that interesting. His last chapter has “twenty moral exercises” which generally lead to more interaction with others (particularly family) and less emphasis on “artificial” self-reliance buoyed up by a vulnerable technological infrastructure.

I wondered how these suggestions should apply to “introverts” or people who do better if they do guard their own spaces and safe harbors in life. Not everyone has children or wants them – but that could be seen as part of “the problem” (as noted in other books talking about “sustainability” and “generativity”). Indeed, the effect that the emotional and financial demands of family life can be passed on to those who did not make their own choices in these matters (including the childless) creates moral tensions. I understand the practical benefit of “staycations” but sometimes one wants the adventure of, say, the high speed train trip to Tibet in China. Media sounds like a poor replacement for people, but media (as understood in the broadest sense, going back for centuries, including performing arts) provides income and culture for millions.

In my case, there are some particular problems. I spoke out (with my self-published books and websites), and presented my taste in “people” as kind of “knowledge of good and evil.” (There are particular reasons for this in my early upbringing: what was probably intended to teach “teamwork” or social interdependency got converted or elaborated into a moral exercise in measuring the worth of people, especially when they do fall behind – all the way back in the 1950s.) Therefore, it’s not surprising that some people challenged me as to why I resist personal “intimacy” (and willingness to give affection to others whom I did not "choose" or give "consent" to) in situations where it is really needed. (My history as a substitute teacher, discussed on other blogs, bears that out.) And, from my social reticence, I have at least come to understand why some people want to see moral purity (even as spelled out in religious texts) around them so that their obedience in setting up familial relationships actually has “meaning.” This is important in explaining some of the horrific things some people have done.

Wallis mentions many ideas that most of us think of as progressive and ultimately improving freedom and sustainability both: alternate fuels (he mentions destruction of the environment, peak oil, and mountaintop removal), and a creative commons for intellectual property. The recent fights over copyrignt and digitat rights management has made it clear that we all might have more if we took a more “Commons” oriented approach to cultural innovation (“Creative Commons”, often discussed by the Electronic Frontier Foundation, is one example).

Link to author’s video discussing his book is here.