Scientific American offers comprehensive view of Titan, most "Earthlike" body in Solar System ("moon" of Saturn) besides Earth itself 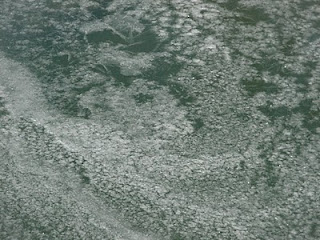 Although usually magazine articles shouldn’t get book reviews (I do a few with NatGeo), the March 2010 Scientific American has a fascinating portrait of Titan, the largest moon of Saturn, well deserving of blogger congratulations. It’s on page 36 (does SciAm use wonderful font for its page numbers? – looks like grade school!). The article is by Ralph Lorenz and Christopher Sotin, and it is titled “The Moon that would be a planet.”

Larger than Mercury, it has an atmosphere thicker than Earth’s, and apparently is the only other body in the solar system with both significant land and liquid surfaces. (That’s superficial – underneath, there may be a water layer, like Europa, or ice; also, the appearance of Triton and Pluto deserves some speculation). The article compares the structure of Earth’s atmosphere’s to Titan’s. There is a kind of pseudo-volcanism that may resurface Titan every hundred thousand years or so (a similar observation has been made about Venus, which turned itself inside out half a billion years ago, pretty recently). But from pictures and aerial maps, some of it looks like California desert country. One observer thought he recognized Malibu Beach in one of the pictures.

The link for the article is here.

One of my own movie scripts is called “69 Minutes to Titan.” That’s about how far light would take to get there from Earth when Saturn is on the same side of the Sun as Earth.


Carl Sagan's illustrated book "Cosmos" in 1980 had offered artist's impressions of Titan and suggested that organic compounds called thiolins fall on the surface.
Posted by Bill Boushka at 7:02 PM