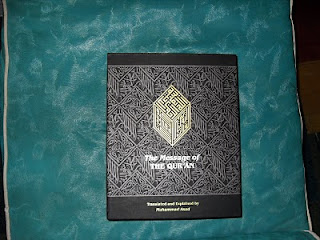 On February 28, I attended a screening of a one hour film “Inside Islam” (see my movies blog March 1) at a northern Virginia protestant church, and at that event someone was offering complimentary copies of the three-volume compendium “The Message of the Qu’ran”, translated and explained by Muhammad Asad (1900-1992, born in the Ukraine), published by The Book Foundation, England. The three volumes are paper, 1174 pages, indexed.

The layout of each page consists of four components: on the upper right is the original Arabic; below it is Arabic transliteration; to the left is an English “interpretation”, and below are the footnotes and commentary. The Prologue explains the proper understanding of “translation”. Eaton writes that the Qur’an (or Koran) may be understood fully only in the original Arabic, because the language contains a syllabic structure that is comparable to poetry and even music. Asad writes in the Foreword, “We Muslims believe that the Qur’an is the Word of God, revealed to the Prophet Mohammed through the medium of a human language. It was the language of the Arabian Peninsula: the language of a people endowed with that particular quick-wittedness which the desert and its feel of wide, timeless expanses bestows upon its children.” He goes on and explains “ijaz”. Perhaps this notion is roughly like what the high school English literature student faces in understanding Shakespeare’s plays in iambic pentameter. However, the use of detailed commentary and footnotes helps justify the English “translation.”

The appendices deal with some esoteric materials, such as the meaning of the concept “jinn” as a kind of hidden but reconciled kernel of consciousness, as well as the Night Journey.

The social and political application of the “message” – and the paradigm that converts the message into human laws of interaction, is always controversial. But Asad believes that the underlying issue is the individual spirit itself, and not just the laws – even if Islam, to the westerner, seems unusually preoccupied with moral perfectionism and justice. Therefore, Asad would seem to support a moderate, civil system of law like what we expect from mainstream Judeo-Christian societies.

This compendium of the Qur’an reminds me of a 1949/1957 book from Thomas Nelson Publishers, “Gospel Parallels: A Synopsis of the First Three Gospels”, edited by Burton H. Throckmorton, Jr.; it used to be taught at American University in Washington DC in the late 1950s by a pastor Frank Baumann. 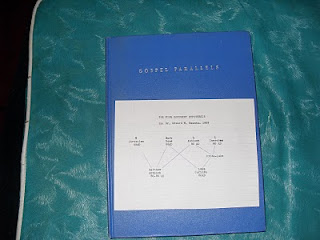