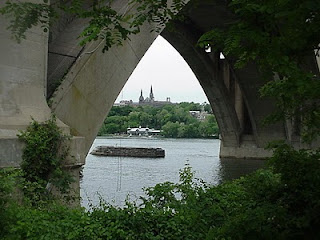 Today the Metro section of the Washington Post reported (Thursday June 10) that the Politics and Prose independent bookstore (link here ) in northwest Washington DC is looking for a buyer, as Barbara and Carla want to retire. The story is by Michael S. Rosenwald with link here. The Post headline claims (online) “a bookstore’s legacy is up for grabs”. But the book's website says that right now everything is "business as usual."

I’ve been to booksigning parties there (not mine). At the end of 2009, Lambda Rising (Washington DC’s gay and lesbian bookstore) closed, probably because it was difficult to compete with the large chains, all of which have LGBT sections (Barnes and Noble in Minneapolis carried my first printing of “Do Ask Do Tell” for most of 1998 and 1999), and particularly with online retail sites like Amazon, less so with ebooks. However the article proposes a new business model, whereby print-on-demand computers (whether Mac, Unix or Windows is unclear) manufacture books right on site (often by independent or self-published authors), somewhat in the way that larger CVS stores make photo CD’s and sometimes DVD’s on site.
Posted by Bill Boushka at 11:54 AM