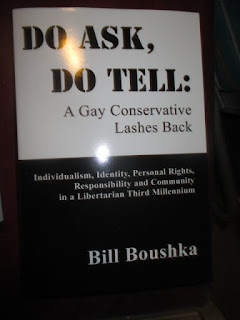 I thought I would put up a posting with the Amazon link to the first of my two major books, “Do Ask, Do Tell: A Gay Conservative Lashes Back: Individualism, Identity, Personal Rights, Responsibility and Community in a Libertarian Third Millennium”. The book was first published in 1997 under my own imprint, “High Productivity Publishing”, and then republished as print-on-demand by iUniverse in 2000.

I discussed the evolution of my “screed” on the BillBoushka blog on Jan. 2, 2007, in its current six-chapter (plus Introduction) format. The first four chapters are narrative, almost like a “non fiction novel”, sometimes making me think that truth sometimes writes better “plots” than can an author’s imagination. There is a beginning and middle, but not really an end. The last two chapter have much less narrative and more analysis. 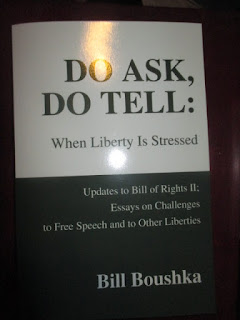 Originally, as I wrote in January, I had imagine a “two part” form. The original first part had three chapters that started with the William and Mary Expulsion, went through the Vietnam era draft, and jumped to the 1993 debate on Gays in the Military (a sort of segmented structure like a Lars Van Trier film, perhaps). I then inserted a narrative of my “Second Coming” as a chapter 3, move the 1993 “don’t ask don’ t tell” narrative to Chapter 4, and then applied the military issue to the “civilian” world in the last two chapters in concentric fashion, winding up with a proposed constitutional amendment. This Chapter 3 covered both the energy crisis of the 1970s and the AIDS crisis of the 1980s, and could have been broken into two chapters. But what I wound up with would be like a “six movement symphony” (maybe like Hevergal Brian’s “Gothic”).

But the format originally submitted to the literary agent in 1996 had a “theme and variations” for part 2, with four topical essays. Because I’m thinking of doing another e-book now, it’s good to return to the structure of these essays:

The first essay was called “Morality’s Third Normal Form” (as with relational database parlance), which was the Honor Principle, originally stated in former midshipman Joseph Steffan’s 1992 book “Honor Bound”. But that comes from the idea of “personal autonomy” or “individual sovereignty” so important as a moral basis (almost in the sense of mathematical linear independence) for libertarians. But then we look back further and find a paradox: there can be no sustainable individualism without some notion of a common purpose, such some religious conservatives tie to the “natural family.” Life cannot be both free and completely just on an individual level; there is a bit of quantum physics or Heisenberg uncertainty in moral thinking (as with the movie or play “Copenhagen”).

The second essay was “Family Values: Let’s Have an Honest Debate”. One can tie this back to the “shared common purpose” concern which drives how parents start teaching their kids right and wrong, sometimes to the consternation of kids mature enough to have their own goals. A particular quote from this essay seems to sum it up now: “The concept refers to the increasing emphasis our culture has allowed to the development and indulgence to the adult individual, and the apparent complications that this cultural permissiveness (along with economic Darwinism) creates for the raising of children, particularly in disadvantaged communities.” One could add that complications ensue for taking care of the elderly without putting them under expiration dates, valuing all human life.

The third essays was “A Fair and Prosperous Workplace” and took the position that “To keep our jobs, we must be worth what we make; then address ‘discrimination’”. This had become apparent enough in previous recessions, and I’m not so sure that today’ unemployment crisis is that different from those of the past.

The fourth essay was “Personal autonomy: a new Dawn of Man” which aimed toward the “Right of Privacy” constitutional amendment (after starting with a comment by Bill Clinton on “not going back to fending for yourself”). My reaction to the chapter now is that Facebook has changed everything! Well, it really hasn’t!

In the fall of 1995, I had actually experimented with an earlier format of the book. Chapter 1-3 would be the same as the “Two Part” structure. But there would be three parts (fourteen chapters). Part two would review my earlier upbringing, especially the dichotomy between being an individual and being a member of the group (a duality expressed in elementary school report cards back in the 1950s). I was able to make a metaphor out of music (especially a less frequently played Beethoven piano sonata, the one in F that starts with a Minuet). The last part would then round out the military issues (the college-draft-military ban line of thought) with the conclusions for the “mainstream world” in terms of the workplace, employment discrimination, and health care policy, before moving to the constitutional amendment question. 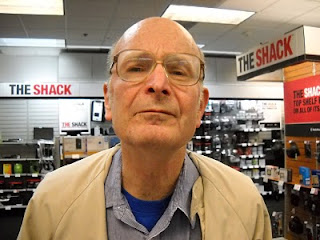 Labels: gays in the military, my book, my scripts