George W. Bush and "Decision Points": Finding faith was like diving into the pool

The former president presents his experience, from young adulthood through the controversial presidency, as the unfolding of life’s challenges to an “ordinary person”.

True, he says early that if he had not made the decision to stop drinking, he could not have faced any other of his monumental problems during his presidency. He also describes the experience of going to a Christian church but not quite believing because he saw himself as a “logical person.” The “born again” experience was a kind of letting go, of diving into the deep end of the pool with dependents needing to be kept afloat.

I do recall his promotion of "faith based" initiatives early in 2001, and his interesting comment during an early speech at Ohio State, "a person without responsibility for others is truly alone".  I believe he made a similar comment toward the end of his Inauguration Day speech in 2001, a Saturday where I went snow tubing south of Minneapolis after hearing the speech. Later he would suggest that more people take interesting in "mentoring a child", and I don't know whether meant to include those who do not have their own children.

I do recall his announcing his stem cell decision, on "conventional right to life" grounds, in August 2001, about a month before 9/11, when I was "home" myself for a visit.

He is very firm in his conviction that he didn’t really “know” much more than the rest of us, despite the elaborate infrastructure for his daily presidential briefings, which go on the road with a president. Having lived in Dallas in the 1980s, I can say it would be nice to have a ranch and a fully equipped and stable personal office in the Texas Hill Country.

His account of how he came to understand the nature of the 9/11 attacks as they unfolded takes a little over a page. He first thought that a small plane had flown into the WTC, and then that a pilot had a heart attack. He experienced disbelief, until a point of recognition, as Andrew Card whispered to him in that elementary school gathering. The "Day of Fire" shocked him and indeed presented an existential threat to our way of life, not necessarily clearer to him because of intelligence, which was often murky. He mentions the New Line film "13 Days" about the 1962 Cuban Missile Crisis. I recall that there was a small "existential" problem about Taiwan in April 2001, however.

On Iraq, he also says he really believed that Saddam had WMD’s, and makes plenty of arguments that even without them Saddam Hussein needed to be removed, given his behavior and the likelihood that he could shield terrorists.

On Hurricane Katrina, he describes some amazement as he flew over the flooded city.

He also experienced the Election Night in 2000 as an ordinary guy, amazed for a while that the media had fumbled the information about Florida. As a factual matter, it simply is unclear whether Gore would have won had the Supreme Court allowed the recount.

He is self-critical on taking up privatizing Social Security, when he says he should have turned more attention to immigration.

One of his most interesting suggestions is that redistricting should be done by a non-partisan committee.

He does not mention gay rights anywhere but he does mention oppression of homosexuals in radical Islam. 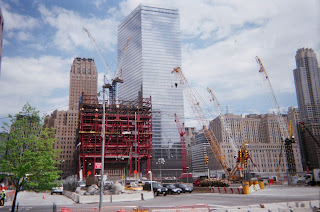