Title: "Light of the World: The Pope, the Church, and the Signs of the Times"

Subtitle: "A Conversation with Peter Seewald"

Publication: San Francisco, Ignatius, 2010. ISBN 978-1-58617-606-8; hardcover, 219 pages (Foreword and Preface, 20 roman pages), Three Parts, 18 chapters, with Appendix; each chapter has the form of a sequence of comments or questions (“is that a question?”), each followed by the Pope’s reply; hence the publisher calls this a “book length interview” with the Pope.

There seem to be three major points in the Pope’s thinking, as to what the teachings of the Church comprise:

First, God has a plan for us, to develop into a civilization that has a future, where we have much input but where He has a final say, and it is arrogant to say that we can challenge his Plan with intellect and reason alone to define “good” in our terms. (That’s a paradox as the Pope must use considerable abstract intellect to compose his answers.) Indeed, we are imperfect by definition and need salvation by Grace.

Second, God provides many instrumentalities for us to develop and gives us Free Will. He does not stop us from making choices that vary from his Plan, because if he did His Plan could not be carried out at all; His Plan requires us to have freedom. But some personal choices are intrinsically wrong or at least contrary to His intentions for us.

Third, because human beings are imperfect, they face challenges or “miseries” which demonstrate need for God. The “miseries” are individualized and different for various individuals and may seem to contradict political ideas of equality.

Before going into the “specifics” of Vatican prescriptions in morality (which are controversial), I’d like to run through a few original scenarios.

One: Back in First Grade, the teacher let us choose between white and chocolate milk for morning snack. But she warned us that chocolate was the wrong choice because it could make us sick. The boy who sat in front of me, Mike, chose chocolate. I said “you may get sick” and he said, “I don’t care.” He never got sick. Was his choice wrong? What was the point of the teacher giving us a choice if one option was always wrong?

Third: In a typical information technology shop, ordinary programmers might not be given regular authority to update production files. This protects the integrity of production systems, but can make getting work done and fixing production problems more difficult. Should programmers be “bonded” and have more “freedom” to do their jobs more efficiently?

You can see where I could be heading: the questions about gay people. The Pope insists that God insists that God’s intrinsic purpose for sexuality is procreation and providing humanity a future, and also he hints that marital sexuality socializes people into meeting the needs of others rather than just following their own “rational” purposes, which for some people can seem quite tempting and rewarding. Hence the famous Vatican doubletalk on homosexuality – and contraception. The book does pay brief attention to his widely announced admission that condoms may be acceptable to prevent STD’s.

The Pope admits he is not sure whether homosexual orientation could be immutable or would develop in the environment. If it is immutable, he might have a problem, because God seems to have created something that is beyond behavioral choice that contradicts his plan. The Pope really doesn’t answer this. Maybe he’s wrong and God intended that some people explore psychological polarity for its own sake, without the need to procreate. But with the “environmental” hypothesis, the Pope may make more “sense”. Sometimes people (especially men) don’t “compete well” according to gender norms; and this is the “misery” that they must deal with to understand they need God. If they were encouraged to express “upward affiliation” openly, we might arrive at a society where people show much less empathy within the family and which people in general have much less “investment” in their biological future. It’s a scary style of thinking, isn’t it.

I understand his reasoning from an abstract perch. But when you say some lifestyles are more in line with God's (or society's) purpose than others, you invite expropriation (and the talk about compassion for "people" as opposed to their indivualities -- whether "chosen" or "miseries" -- sounds like a contradction). And some people feel that, to lead their own lives dedicated to marriage and family, they need to see everyone else have to do the same so that their world has "meaning."

The Pope does rationalize the celibate priesthood. He writes “Homosexuality is incompatible with the priestly vocation” (in analogy to the Pentagon’s 1981 statement “Homosexuality is incompatible with military service”). He takes head on the idea that celibacy could become a “pretext for bringing people into the priesthood who don’t want to get married anyway.” He also writes that homosexual orientation “estranges them from the proper sense of paternity”, as if to highlight that generativity is an intrinsic moral responsibility for everyone. It wouldn’t be hard to connect the Pope’s thinking with right wing arguments about “demographic winter”.

The Pope does discuss the abuse scandal in terms of going back to standards of right and wrong, and in other parts of the book he gets into some things that are generally esoteric, such as Fatima’s appearances (Portugal) and the healings at Lourdes (France) (I visited both in May 2001).

Seewald sometimes begs the questions, summarizing moral arguments on his own, particularly toward the end, where he suggests that a media-saturated and “me first” world takes people away from the social cohesion (and Godly devotion) that a society needs for sustainability. 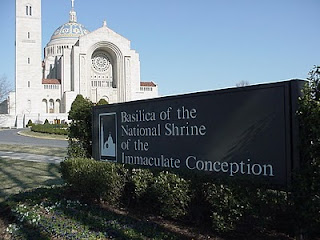