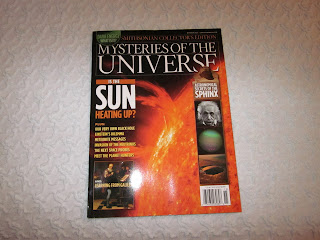 The Smithsonian has a Collector’s Edition for Winter 2011 of “Mysteries of the Universe” (104 pages) about many topics.
But the most important piece, by Robert Irion on p 70, “Staring at the Sun”, echoes the warnings that a large coronal mass ejection from the Sun could wreak havoc. Like the book by Lawrence Joseph reviewed Nov. 9 here, it discusses the 1859, 1921 and 1989 CME’s, and warns about our growing dependence on electronics.  It says that the effect of an 1859-style event might be reduced by precautionary voltage reductions by power companies and by various measures to redact satellites, but the damage could be over a trillion dollars and be long lasting.  Also, it notes that the 1859 event occurred after a period of little sunspot activity, and notes that sunspot activity dropped almost to zero in 2008 and 2009. But rather than 2012, it seems to think the greatest risk occurs in 2013 and 2014.
There are articles about all kinds of things, like the black hole at the center of the Milky Way, which does not have a quasar, but which will develop one in some billions of years when the Andromeda Galaxy approaches.
It talks about the Solar System, but does not have pictures of Europa and Titan, a disappointment.
It also has an article (“Ready for Contact”) by Sarah Zielinski about the search for extraterrestrials, and notes that a laser reply would be a sign of intelligence.  It is guarded as to how arriving extraterrestrials would treat us, but probably not as badly as in the film “Skyline” (or “V” or “The Event”).
If you believe in the idea that family gives future beyond the self, you have to realize that some day Man will have to find a new home, a new solar system, maybe a new galaxy or new universe to live in. Ever wonder “what makes me who I am?”  Why am I experiencing myself in 2010; why wasn’t I born in earlier times in more “primitive” conditions with more collective values?  It seems that “consciousness” or “soul” is an entity like matter and energy, and that consciousness can transcend the universe’s speed limit and jump universes.  It would make sense to transmit a person’s soul through a wormhole and reassemble it in another universe from the information transmitted, much like a download from the Internet, even like Facebook.
The link for the “Magazine” is here. It can be found in many supermarkets and retail outlets.
Posted by Bill Boushka at 8:55 PM