In my junior year in high school (they say it’s the hardest year), I remember having to read and compare two biographies for English. One of these was “The Autobiography of Benjamin Franklin” (now available from Dover paperbacks),with its Moral Perfection Project of the Thirteen Virtues. I thought the family had a copy, but I don’t see it, so maybe I did borrow it from that old Clarendon library. The other biography was that of Edgar Allen Poe, and I even recall giving an oral book report on that, vividly, some public speaking experience setting up my 1998 talk on my own book, maybe.

Time Magazine offers (in supermarkets and pharmacies, mainly) a spiffy illustrated paperback “Benjamin Franklin: An Illustrated History of His Life and Times” (128 pages), by Richard Lacayo.

The book makes Franklin, our greatest non-president among the Founding Fathers, into a kind of heterosexual Leonardo Da Vinci or polymath. As a teen he might have come across as someone who would get onto “It’s Academic” or “Jeopardy” today. He was also given to philosophical ruminations (as a friend in the 1970s said, “verbosity promulgates egregious epigrammitization”). At 19, he wrote “A Dissertation on Liberty and Necessity, Pleasure and Pain” and tried to argue that evil does not exist. Later, he tried to destroy all copies of this foolishness, but here it is (link http://www.questia.com/read/77355496 ). Most of us know of “Poor Richard’s” pamphlets. Like #3, “Journey of My Voyage”, all rather self-centered, comprises lots of short passages rather like blog entries. Franklin’s activity in the printing business probably got him as close to global self-distribution, in comparison to what happens with today’s Internet, as anyone achieved. He also helped other pamphleteers, including Thomas Paine.

But perhaps it took his sort of Ayn-Rand-hero personality to enable everything he did, including is inventions (such as his armonica (p 54) where wine glasses produced musical tones, and for which Mozart and Beethoven wrote music (no polytonality yet, please).

His sense of family values was interesting, as he entered into a rare common law marriage with a woman whose first husband had deserted her, and as he had his first son by another woman.

Franklin’s contribution as a political founding father are in every history text, of course. He was early to oppose slavery, and the different schemes for representation in the House and Senate were largely his. Yet it’s his contribution as a literary content originator and distributor, relative to the capabilities of his day, which he increased, that seems like his most remarkable achievement. Intellectually and as a business person, he compares to the Internet entrepreneurs of our era. 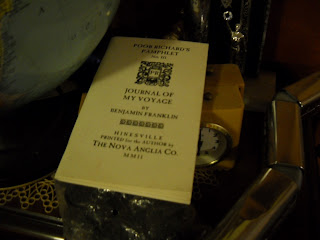 The book sells for about $10 and the illustrations practically make it into a filmstrip (like what we used to have in grade school, in the 50s of course).

Franklin was also an avid chess player, but the rules may not have been quite the same as today, and published opening theory in those days was very limited.