Dan Abrams and "Man Down": Women are better than men at almost everything

Author: Dan Abrams
Title: "Man Down: Proof Beyond a Reasonable Doubt that Women Are Better Cops, Drivers, Gamblers, Spies, World Leaders, Beer Tasters, Hedge Fund Managers, and Just About Everything Else"
Publication: Abrams Image, 2011. ISBN 978-0-8109-9829-2, 144 pages, hardcover, 5 parts and 36 very short chapters, with a “Closing Argument”
Dan Abrams has been chief legal analyst for NBC News (not to be confused with Pete Williams, who covers justice issues).  He’s been touting this little tome, which seems to be self-published, on the Today Show.  And to show that men wince at pain more (whatever the history of Sparta), he followed the example of Donald Trump’s Apprentice contestant Troy McClain and allowed his legs to be waxed on camera (good thing it would still make a difference).  And he mentions the Universal movie “The 40 Year Old Virgin” with it’s man-o-lantern.
But it’s true, girls mature earlier than boys, and in recent years it’s become apparent that they will outperform boys when allowed to in school.
That was apparent to me when I was growing up in the 50s.  Warren Farrell covered the problem well with his 1993 book “The Myth of Male Power” (Legato).  Men were expected to engage in risky group pursuits to protect the women and children – progeny – in a community. Hence, as conservative writer George Gilder has often argued (“Men and Marriage”, 1986, reviewed here April 12, 2006), women are biologically superior and political power for men is a necessary contrivance set up to make them needed; they find meaning only when they settle for monogamous marriage with children.
I wonder if that has something to do with sexual orientation; some boys will perceive that it is in their “self interest” to skip all the self-sacrificial ritual rites of passage and move toward upward affiliation instead.
At least women don't play in the NFL.  But it's just conceivable they could show up in MLB some day. 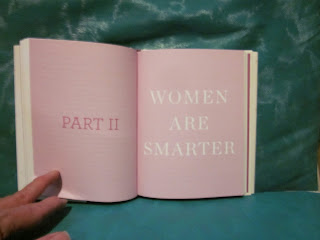