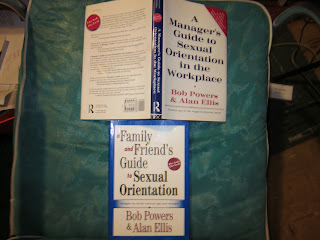 On June 5, 2010, I “reviewed” my own “Do Ask Do Tell” books, particularly the first one (1997; 2000).
I wanted to account for two books written in the 1990s by Robert J. Powers and Alan Ellis, originally published by Routledge (and later Baker & Taylor).
The first was “A Manager’s Guide to Sexual Orientation in the Workplace”, 1995,  ISBN 0-415-91277-6, 209 pages, hardcover (my copy). There is a tagline “Tackles one of the toughest diversity issues.”
The second was “A Family and Friend’s Guide to Sexual Orientation”, 1996, ISBN 0-415-91275-X, 273 pages, paper (my copy, found at a Barnes and Noble in Minneapolis in 2000).  The cover has the tagline “Bridges the divide between gay and straight”.
Both books tend to come across as “handbooks”, and follow a writing style that seemed to be more common in the 1990s than today, especially when dealing with social issues.  The second of these has space for readers to write their own comments. Neither is concerned with existential questions.
Both books sport a circular red button with the phrase “Do Ask Do Tell” in white letters, on their respective covers. But a USPTO search shows that a trademark application for the phrase (for use in sale of various paraphernalia or book promotions [movies, maybe?] was (after submission by Powell) abandoned in 1996. Neither book used the phrase as part of the title.  In general, movie or book series titles can become trademarks when used in several (at least more than one) books (as with IDG’s “for Dummies”) or movies (“Star Wars”, etc), so that the consuming public thinks of them as “brands”.  There is some relevant discussion on my “Trademark” blog Feb. 4, 2010 (see Blogger profile).
The Amazon link for the books is here.
Originals of both books are very expensive (they seem to be regarded as collector’s items).
Posted by Bill Boushka at 6:12 PM