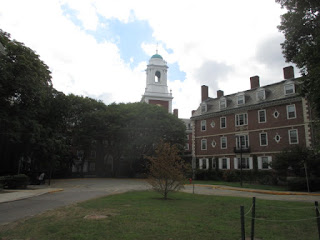 Kaku is well known on television as he often appears in documentaries talking about climate change and the other issues from the perspective of physics. He teaches at the City University of New York.
Well, we probably won’t see “The Event” or “Flash Forward”.  But Kaku is big on how far information technology will take us, here on earth, to the point that all our devices will be so smart, that we’ll get Internet access (and Facebook, probably) through our contact lenses.  We’ll get information and move objects with telepathy or thought. That’s a scary thought.  A hacker could change something on your computer or even your home devices with an evil thoughts.  Private lives as we used to know then will be gone.  The limit to the communications revolution is Moore’s Law, which is already being approached by the physical sizes of molecules and atoms.

And I’m not sure I want my vulnerable bod being surveyed by instruments all the time, telling me about my first colon cancer cell.  There is some relativity here: constant observation and monitoring of bodies will change them, and change the way we perceive them, even in sexual situations.  Old fantasies may give way.
Getting to other planets, terraforming them, and getting to the stars will take much longer. He goes into the theoretical discussion of Type 1, 2, and 3 civilizations. We haven’t even gotten to Type 1 yet, and we’re in a dangerous phase.

He notes that wars are nearly always started by authoritarian interests; democracies don’t attack one another with violence. So the neoconservative impulse to export democratic capitalism is indeed well founded.

The connecting concept seems to be nanotechnology, which could become the bridge between the living and inanimate worlds.  Maybe there is a miniscule risk that the nanotechnology explosion could go awry and change our planet into a strangelet.  But nanobots can, in a sense, self-replicate like living things and could be used to explore other solar systems.   It will take several centuries at least before human beings could go to other solar systems in a conventional way.

Nanobots (as in “Jake 2.0”, the former series on UPN) raise another issue, consciousness.  It’s my own belief that a “soul”, or “unit of consciousness” is another object in the world of physics that one day will be understood as something fundamental and perhaps indestructible, or perhaps subject to entropy, to the point that we know what happens in the afterlife, if anything.  My concept of the “soul” is a reference point for self: I make my own choices, and bear the consequences of my own actions, in a manner that is normally irreversible because of the time arrow.  My sense of who I am seems continuous back to childhood, to the late 1940s, even if I cannot recreate every day since then, and even if most of the cells in by body have been replaced.  Why am I me now, rather than in the time of the Pharaohs?  Or perhaps ancient Sparta, which I could not have survived.

Our familiar mammals have individual personalities and “souls”, but I would wonder about, say, social insects.  The ant or bee colony raises the question of the “group mind” as the soul, as in the end of Arthur C. Clarke’s “Childhood’s End”.  Can a machine or artificial system develop a soul, as in the “2001” movie? (HAL)  Could nanobots generate a soul?  Are stars themselves conscious of themselves, since in a sense they are born and “die” (sometimes with supernovae)?  What about entire galaxies?

The book ends with a description of the life of a vigorous 70 year old on New Year’s Day, 2100.  That would make for a good short film. The ride on the space elevator looks interesting. But the prospect of enormously expanded lifespans and designer babies (by gene manipulation) certainly will raise moral questions, as well as demographic ones.  Social Security cannot continue in a world where most people live to be 500.  And we won’t need Sophia from “The Event”.