A note about Amazon image icons 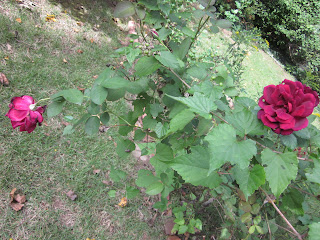 I have, until recently, used the icons from Amazon Associates to display images of the books I review. Recently, the gadget has stopped working. Here is one explanation which I will have to experiment with, from the help forums (link):  I could not get this to work today.
The problem appears to be related to programming within the Amazon widgets, with some problems with “instances” of the email address.  Maybe there is a problem in that my gmail address is used by the gadget, but my regular Amazon account uses an AOL email address.
Icons previously created by the gadget on this Book Reviews blog still display.
In the meantime I’m displaying my own image of the cover and giving an Amazon link manually.
Posted by Bill Boushka at 11:43 AM No comments: 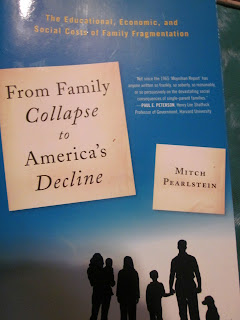 Author: Mitch Pearlstein (president of the Center of the American Experiment, Minneapolis).  (link)
Title: “From Family Collapse to America’s Decline: The Educational, Economic and Social Costs of Family Fragmentation”
Publication: Rowman & Littlefield Publishers, Inc.; paperback, 165 pages (also available hardcover), indexed, Introduction and seven long chapters;  ISBN 978-1-60709-361-9
Amazon link.
I sometimes visited the sessions of the Center of the American Experiment when I lived in Minneapolis from 1997-2003. One time, John Stossel spoke there for a luncheon.
The book, which is a bit expensive, has a “mouthful of words” for a title, suggesting the conservative message that America’s economic problems are the result of weak families rather than corporate “exploitation”.   There’s no question that the recklessness on Wall Street in the last decade contributed to our current mess, but there’s also no question that a lot of people in trouble with “pineapple upside-down cake” mortgages “tried to get something for nothing”.  If you want to look for blame, there’s plenty to go around. All the current presidential candidates know that.
The book is also somewhat dense in writing style, compared to the earlier collection “Closer to Home” from the same source (Mitch Pearlstein and Katherine Kersten, reviewed here March 28, 2006; I had made a major comment about an essay in this earlier book on my “Issues blog” Feb. 3, 2011.)
In this book, the term “family fragmentation” and the synonym “family collapse” largely refer to people having babies out of wedlock, or getting divorced and leaving single parents. (At the start of his last chapter, Pearlstein, somewhat painfully, tells the story of his own daughter.)  But a corollary process is the reduction in family formation in the first place.  This trend has many causes, including the accumulation of males who are seen as “unmarriagable”.  Toward the end of the book, Pearlstein discusses the way people with relatively minor criminal records get effectively blackballed, with the Internet making it worse (grazing on the “online reputation” issue I have covered at length before).
He also discusses, in a few places, discusses the notion that individual goals have changed over the years, with an outlook we might call “expressive individualism”.  Here, it gets tricky. Once people have children, they need to be prepared to put their kids first (and stay together in a marital relationship); that idea itself is not controversial (or maybe it is to some people).  But in recent decades there has been a tendency to postpone marriage for career or “self-advancement”, resulting in lower birthrates among people who can probably afford children (the “demographic winter” problem), and a greater likelihood people will grow old alone (he discusses on p 71) – which ties into another notion of “family fragmentation” discussed by Jennifer Roback Morse and others – that extended families are made weaker by single people who leave the nest and leave eldercare to “government programs” like Social Security and Medicare (that gets into a complicated and controversial area that I have covered a lot elsewhere – Morse’s idea is oversimplified, to say the least). Pearlstein pays heed to gender-specific problems, that boys are affected a lot more than girls by deficient environments, and notes that we seem to be heading toward a society where women don't need men -- an issue George Gilder had written about in the 80s.
Pearlstein doesn’t address gay issues in this book much, beyond the same-sex marriage debate on pp 21-23. (In his native Minnesota, a blue state, there is a proposed state constitutional amendment to limit marriage to one man and one woman.)  But I have, in my own mind, done a lot of introspection, as to why over the years others made so much of my own homosexuality, and personal aloofness, which in me are hard to separate.  I think that a lot of this has to do with an expectation that everyone be ready for the kinds of permanent relationships that can both raise children and (especially recently, with longer lifespans) take care of the elderly and disabled, without so much government intervention.  I took myself out of the game, in the minds of many people; if too many people were allowed or particularly encouraged to opt out this way, a free society could not sustain itself and could “slouch” toward totalitarianism.

Posted by Bill Boushka at 9:40 AM No comments: 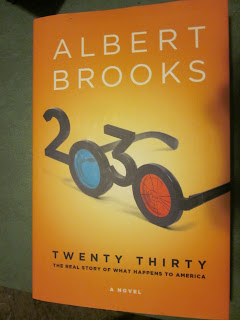 Author:  Albert Brooks
Title: “Twenty Thirty: The Real Story of What Happens to America”, a Novel (aka “2030”)
Publication: New York: St. Martins, 2011, ISBN 978-0-312-58372-9, 375 pages, hardcover
Amazon link.
Want to know what happens to America?  It’s not like “2001: A Space Odyssey” or “2010” (already passed). No, shortly after 2030, the US gives up its sovereignty (and a lot of people’s civil liberties) to China.  Donald Trump told us so.
In fifty-seven short chapters, Brooks lays out, in real time, docudrama fashion, how America unravels under its first Jewish president.
Cancer and (more or less) heart disease have been “cured”,  and the elderly, with their clout, are living forever.  Medicare benefits have been slashed, and their adult children are getting stuck with the bills. (Brooks could go into detail on filial responsibility laws if he chose to.)  And the health care system is still fragmented into islands of self-interest.
Most of the US budget is taken up paying the debt.  Then, one June morning in 2030, LA is leveled by a 9.1 earthquake.  Flash mobs rule the city, and the US cannot afford to rebuild. So it enters into a political “parthership” with China to rebuild, eventually jeopardizing its sovereignty.
For newly homeless seniors in LA, the new powers that be come up with an ingenious “final solution”: retirement ships.  Seniors turn over their lives for little cubbyholes on a ship that carries 2500 of them at a time out of harms way forever.  But that sets up the climax of the “novel”: the hijacking of the ship by the rogue “young people” who, among other things, demand that no one be allowed to vote after age 70.
Brooks does allude to various other issues, like how the news media has become fragmented by bloggers and amateurism (p 38).  He mentions gay bars and a gay conservative writer at one place (is that me?, or is it “Gay Patriot”?).  He could have talked more about the “demographic winter” issue, but his view is that the senior care crisis is coming anyway (he could have gone into Alzheimer’s more). At one point, a younger character expresses the view than an elderly person has lived his life and it's the young person's turn. But the young people have been assigned the filial debt of their parents and grandparents.
There is something about a catastrophe of the size of the LA earthquake in the book: it makes the monetary system and paper wealth rather irrelevant.
Michelle Singletary, Washington Post financial columnist, wrote a review and dire warning based on this book Aug. 7 here, "'2030': This financial horror story could be our future", link here.
The AP has an embeddable clip:
Check YouTube also for a NYTimes interview of Brooks.
Posted by Bill Boushka at 11:52 AM No comments: