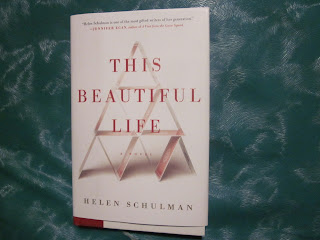 Author:  Helen Schulman
Title: “This Beautiful Life”
Publication: Harper, ISBN 978-0-06-202438-1, 222 pages, hardcover; no chapter numbering, no table of contents (fiction)
Amazon link:   The Amazon page includes "A Novel" as a subtitle.
While the media has focused somewhat on the dangers of teen cell-phone “sexting”, this novella is based on the same concept, but with ordinary laptops (Macs, in fact).  In a nutshell, an upper class teenage boy, Jake Bergamot, goes to an unsupervised party, things happen; an eighth grade girl films some of it (involving him, her, and other minors) and emails him the video. Titillated, he forwards it to one friend. It goes viral. His school suspends him, even though the entire incident happened off campus and had nothing to do with the school. There are business consequences for his parents, and so on.
The setting of the book is a kind of literary “Gossip Girl”, a notorious CWTV series that shows how a rogue blogger can pull strings in the social world of Manhattan (and upstate suburban) preppies (even pre-Facebook).   The author brings to life the emotions of family and peer life in this world quite graphically, and uses particularly adept metaphors and soliloquies in dealing with the physical coming in age.  For example, a couple of times she mentions the surprise of Jake and even his mother at the sudden pubescent appearance of thick hair on his lower legs and feet, where in one scene Jake is curiously disgusted by his own maturation. Jake's (heterosexual) urges, driven by emerging hormones, seem quite immutable and driven by underlying biology, without much conscious supervision. (I can remember my own father's saying to me, "One day, blue eyes will confuse you..."  From the viewpoint of my parents' progeny, they were the wrong eyes.)
In communicating the compelling biology here, the author shows a tendency to repeat the same words or phrase; my proofreader caught this when I worked on my own books.
Later, Schulman describes pretty well the issue of taking final exams when you’ve been out of class and suspended, and wondering how many points you could drop and still pass.  Jake had been a good student. What happens to him is almost a tragedy. All he did was forward an email to one other person; he didn’t even create the video or consent to it.  It seemed as though the school and authorities could have been going after a lot of other kids and parents.  (The legal question has to do with possessing and disseminating “child pornography.”)  But Jake could bear the worst consequences. Order off the web, maybe get sent to a military school, or something.