Ted C. Fishman: "Shock of Gray": the sudden challenges of an aging world 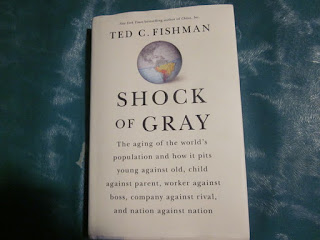 Author: Ted C. Fishman
Title: “Shock of Gray: The Aging of the World’s Population and How It Pits Young Against Old, Child Against Parent, Worker Against Boss, Company Against Rival, and Nation Against Nation”
Publication: New York: Scribner, 2010.  ISBN 978-1-4165-5102-7, 401 pages, hardcover, indexed, ten chapters with Introduction; also, poem “You Are Old, Father William” by Lewis Carroll, from “Alice in Wonderland”
Amazon link.
In the Introduction, on p. 17, the author makes a blunt statement, that summarizes it all: “An aging world is an increasingly dependent world. It will demand that a growing portion of the population devote their lives to the growing share of people who need care.”
An then, on p. 309, in Chapter 9, on China, he mentions that today China’s law allows parents to sue their adult kids for “alimony”, and then in a footnote discusses Singapore’s filial responsibility laws in some detail.  Later he discusses the practice of younger adult workers sending money to parents, comment in most non-western cultures (particularly when they emigrate).  Curiously, he never mentions that in the United States, about 28 states have such laws (rarely enforced, although state budget crises could change that). 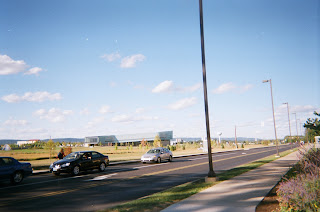 Fishman’s book has blocks of comparison. He starts out with a chapter on senior life in Sarasota, FL.  Later, he has a mirror chapter on Rockford, IL.    In that chapter, he latter  discusses the growing and heavily franchised home health care industry, and the tricky problems that come up when clients practice racial discrimination.
He also has separate chapters on Japan and China.  Both countries have dealt with, in different ways, Asian traditions of family solidarity, bending them as necessary for economic (and in China, political) necessity.  Japan has offered 50 year mortgages to encourage extended families to stay together but then has to contemplate taxing adult children who don’t leave home to start families of their own. China, during Maoism, wanted large but socially weak families.  The one-child policy in 1979 would complicated everything, meaning fewer children, but eventually fewer old people. But “little emperors” would grow up and work in a get-rich but autocratic culture, and forget that they would have to learn to take care of people.
Fishman also has a couple chapters of the process of aging.  I didn’t realize that cognitive solstice takes place as early as age 27.  After that, while knowledge may increase, the days get shorter (as well as the ability to play speed chess).  People  (and all animals) age – and therefore must reproduce – because of a process in physics called entropy – decay. By around age 30, in most (not all) people, the effects of age, however gradual, can be noticed on visual inspection.  Men may show a widow’s peak, then frankly receding hairlines (not always) and in time even lose hair from the legs.  Everyone shows facial lines as tissue underneath the skins slowly receded.  (Dr. Phil used to call all this “tissue death”.)  Keeping the partners of a marriage “interested” in one another for life requires social support – procreation and the belief that one is passing on the same sense of socialization onto one’s kids.  It doesn’t always work.
The right wing talks about “demographic winter” as part of a murky strategy to restore the psychological imperative of the heterosexual family and “rule of reproduction” for everyone.  It’s also a term aiming at the politics of what is going on in the West:  immigrant (often racial or religious) minorities have most of the children, ultimately threatening a political unraveling of western secular democracy  (see Bruce Bawer, “While Europe Slept”, discussed here July 25, 2011).
The fact is, however, something has really changed:  wealthier populations are living longer, with longer periods at the end of life with marked disability, particularly Alzheimer’s.  At the same time, individualistic values of “personal responsibility” along with rising costs have discouraged wealthier populations from having as many children.  No wonder we will have a Social Security and Medicare crisis here, and that Europe is in trouble now.  Statist welfare programs, in an era of weaker emotional ties within extended families, are not sustainable.  Earlier, less wealthy and more collective societies, had to have more children, to build enough mass to protect a population from external (natural and manmade) dangers.  They relegated the unmarried to staying at home to take care of filial responsibility, but, paradoxically, the elderly usually did not live long once they got sick.  Today, the system has flipped.
Posted by Bill Boushka at 12:44 PM No comments: 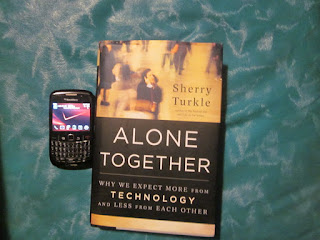 Title: “Alone Together: Why We Expect More from Technology and Less from Each Other”

Imagine, if you will, standing on a ramp above the dance floor at a gay disco. It’s late. Down below, “love trains” form. Then, a little blink at the waist area on one of the guys, and the train breaks apart. The guy looks at the limelight glow of his smartphone.  A CIA spy could probably hack it.
A sentence on p. 280 may summarize Turkle’s thesis well. She writes, “The ties we form through the Internet are not the ties that bind. But they are the ties that preoccupy.” Remember that hymn, “Bless be the ties that bind” that we (I at least) used to sing when Sunday night program services broke up in the 50s, when people talked about “fellowship”?

During a difficult period in my life, the college years, my father (and more than one psychiatrist) said, “You don’t see people as people.”

But today, according to the author, nobody does.

Her book is well bifurcated into the two parts (rather like a two-movement piano sonata).  The of these is “The Robotic Movement: In Solitude, New Intimacies”, and then the second is “Networked: In Intimacy, New Solutions.”

The first half of the book takes where the movie “2001” with the robot spaceship leader HAL (“IBM”) left off.   People really take seriously the idea that robots can help raise kids (or keep them company), and particularly, now, take care of the elderly, freeing us from involuntary filial responsibility.  Kids may have a hard time learning the difference between a “living soul” (as my father called it) or a machine – or a symbol, something psychiatrists (even in my case) call a “part-object” (which she mentions).

In the second half of the book, she gradually migrates toward the now common discussion about the total gutting of privacy as we used to view it, in a social networking world where teenagers have to design whole strategies around getting to know what amount to avatars rather than real people – just to have a chance to compete in the world of real people.  She provides a lot of parallel diversions, such as a discussion of Second Life, as a total substitute for what my mother called "real life". (She called herself "Rachel" there; in more recent times, social networking sites have discouraged pseudonyms or anonymity, as I've discussed elsewhere.) She makes the odd comment that kids don’t see bullying as an unforgivable transgression the way they see observable political disloyalty.  The former is normal social combat. The latter exposes one to the roving cameras of others – the tagging, the matching, the archiving, the timelines, and the assessment of future (or even current) employers.  Yet kids barely understand the real implications of online reputation in the adult world – whole countries can fall on it.

We may, despite the compulsive behavior that social networking sites may drag us into (almost as mandatory) be losing our ability to live as social creatures.  If so, our sustainable future could be bleak.

Google presents an hour long interview of the author on YouTube about the book.

Posted by Bill Boushka at 5:54 PM No comments: