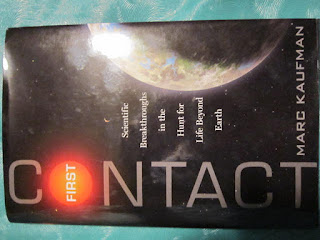 Author: Marc Kaufman
Title: "First Contact: Scientific Breakthroughs in the Hunt for Life Beyond Earth"
Publication: 2011, New York, Simon & Schuster, ISBN 978-4391-0900-7, 213 pages, hardcover, indexed, 10 chapters.
Amazon link.
Kaufman makes a good case the hope that there is intelligent life besides us within striking distance, probably in our galaxy, maybe out galactic neighborhood, and certainly the Universe, and certainly in a Universe.  In the end, he does answer “anthropic” or “Rare Earther” arguments that the Earth as a habitat for us is fortuitous indeed.
The range of possibilities is quite large. But Kaufman spends most of his book on concrete evidence within our own solar system. He spends a lot of space on Mars, going back to the 1976 landings, as well as discussing the Mars Meteorite. He discusses extremophiles on Earth, including the organisms in Mono Lake that substitute arsenic for phosphorus.  I would like for him to have spent more space on Europa and Titan. 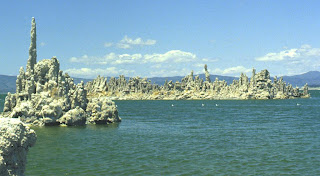 The news media has made a lot recently of the discovery of planet in the “Goldilocks Zone” around a star similar to our Sun about 600 light years away. But the large distance to that example raises the question why we don’t have more of them in the 30-50 light year range.  (That particular planet may still be too large, and much hotter deeper in the atmosphere, if thick.)   Most stars likely to have stable planets are small stable M Stars, which would have been around long enough to give life time to develop (such as Gliese – the G planet is still in dispute).  Planets around these stars usually have one side facing their suns because of tidal lock.  This does not preclude intelligent life, and, science fiction writers could have fun describing the politics of an “annular” civilization on such a planet.  Do all advanced civilizations have money for exchange?
The New York Times series on the Goldilocks Problem dates to Dec 3 and is here.
I think there is something to the idea that life develops as a way to counteract entropy.  A conscious being with Free Will and the requirement to absorb the consequences of its actions would be the ultimate challenge to entropy.  So “nature” might have an incentive to let this develop where possible. The universe may be relatively new in developing advanced civilizations; ours may be an early one with many more to follow over billions of years.  The “soul” or element of Free Will, may be an “object” in physics, somehow related to thermodynamics, that cannot be destroyed and somehow persists, to reappear in other civilizations – maybe in other universes through black hole wormholes.  Maybe the Law of Karma applies, and the Afterlife, in that sense, is real.  It’s hard to see how a being in one universe becomes permanent and immortal – either an Angel (locked in physical perfection, like what you want to see on a disco floor) or a Christ figure – without violating the Second Law of Thermodynamics (hence we need biological reproduction).  But maybe there is some mechanism.  Does the birth of stars and galaxies and new solar systems represent some sort of anti-entropy process that is somehow self-conscious and alive?   Are souls somehow processed by Black Holes after death?

I sometimes wonder if artistic works, especially musical compositions, have a consciousness of their own that survives forever.  Because music is based on universal mathematical relationships, a Beethoven sonata would work for sentient aural beings on any world.
There is something interesting about conventional religion: it’s insistence on only one specially created World, and yet Heaven and Hell (and maybe Purgatory) that by logic must be specific extraterrestrial places (even if in other universes).
Here’s Marc Kaufman’s lecture at Authors at Google (46 min), May 27, 2011.
I did see "Contact", directed by Robert Zemeckis, on July 11, 1997, the day of publication of my first book, with Jodie Foster and Matthew McConaughey. I remember the discovery of the signal, the code, the trillion dollar machine (which explodes once), and the travel to the other planet.  I also remember David Bowie as "The Man Who Fell to Earth".  While in Minnesota, I met Timothy Johnson, director of "Six Days in Roswell".
What would happen politically on Day One after "Official Contact"?
Wikipedia attribution link for Mono Lake picture my last visit, 1985, also a couple of visits in the 70s.   I’ll do it again. US 395 is cool, one of my favorite highways.
Posted by Bill Boushka at 8:48 PM