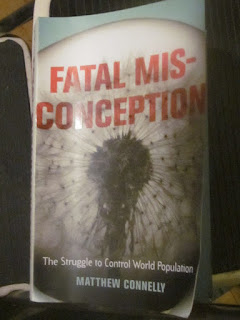 Author: Matthew Connelly, Professor of History at Columbia University, New York NY.
Title: “Fatal Misconception: The Struggle to Control World Population”.
Publication: Belpnap Press, Harvard University Press, 2008;  ISBN 978-0-674-02423-6 paper, 520 pages, heavily indexed; major text ends on on 384; Introduction, nine chapters, Conclusion.
I had been under the impression that the book is new, but it was originally published in hardcover in 2008 and in paper in 2010.
The author gives a textbook-like detailed account of the population issues in modern history. He notes that many nations, at different times, have promoted increasing population, imposing a responsibility on adults (especially married women) to bear children and on men to sire them, that goes beyond even the idea that people have personal rights to make reproductive choices at all.  But much of the time, in the past century and a half, there have been many organized efforts to reduce birthrates, particularly among poor populations and in less developed parts of the world.   Connelly covers many attempts at eugenics (not at all limited to Nazi Germany), and the more “modern” history of China’s one-child-per-family policy. 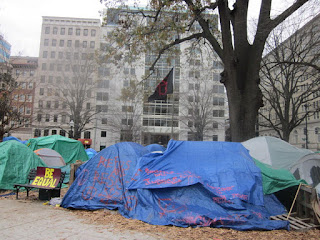 These efforts have sometimes contradicted earlier moral teachings against contraception, let alone abortion. The author gives an interesting history of the legal problems France faced when it incorporated north African areas (Algeria) as part of its sovereign territory, because it suddenly wanted to control Muslim reproduction within its legal framework.
He also notes that at times, some moral interests have drawn little or no difference between contraception (or avoidance of having children deliberately) and abortion or euthanasia (p 148). The teachings of the Catholic Church figure in, as the Vatican has always presumed one has an intrinsic responsibility to participate in raising a new generation, by parentage if possible (unless one took a vow of celibacy/abstinence and poverty).
The author, in a few places, notes the possible coincidence of arguments concerning equal rights for homosexuals with the aims of population control.
In his conclusion, Connelly notices the subtleties of today’s arguments about population. Having already noted that fertility rates in many parts of the world (even the developing world) starting slowing in the 60s, he goes on to note that wealthier nations have been shocked to discover the difficulties they will have supporting aging populations with fewer children.  He soft-pedals the obvious potential political problems:  If western nations see an increase in immigrants (especially Muslims) with higher birthrates and a lower standard of living, western freedoms as we know them could be at eventual risk. So most European countries (much more than the US) have offered parents special benefits (which the childless would potentially pay for).  In a few cases, like Singapore, countries have tried to encourage only those with more education to have more children.
Connelly notes that lowering the growth of population does not directly reduce the strain on the environment.  Families may be smaller, but more people may live and consume resources alone; there could be fewer people but more households.  People may become dependent on hiring services from those who have more children.   In the end, Connelly supports a rather libertarian position on birth issues.   Political attempts to control the reproductive behaviors of other people through coercion just won’t work in the long run, he argues.
Here is Connelly’s own web page for the book.
The author appears in this YouTube Cross Talk by Russia Today.
Posted by Bill Boushka at 5:48 PM