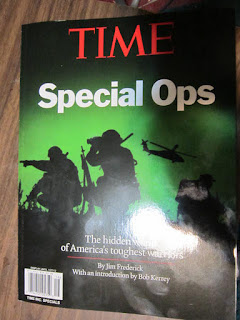 When you’re in a local supermarket you may see a notebook-sized booklet from Time, “Special Ops: The Hidden World of America’s Toughest Warriors”, by Jim Frederick, with an introduction by Bob Kerrey, 96 pages, very heavily illustrated, nine chapters.
The book opens with a detailed account of the hit on Osama bin Laden the night of May 1, 2011, with “Operation Crankshaft”.  It ends with an epilogue on how a special warrior can even had a normal family life.  There are many inserts, such as on p 31, Ryan Zinke writes “How the SEALs trained me for life”.
The most interesting part is the discussion of the grueling training (not only the well-known survival escape-and-evasion where you live off the land, but also preparation for extreme rendition, and exposure to things normally unhealthful, such as extended periods of high-pitched loud noise. The physical fitness requirements would of course be extreme (most of all the swimming and underwater tests  -- the photo on p. 27 is certainly appealing), but there probably are civilians who could pass them.  It is amazing how well some men survive these.  (I didn’t see women discussed.) How would professional athletes (football, baseball, basketball, ice hockey) players match up against Special Forces requirements?  How would very fit actors (Taylor Lautner or Ashton Kutcher come to mind)?  Probably they could pass most of them.  Even some musicians (classical performers, singers) say that they have to remain extraordinarily fit.  (Kutcher played a Coast Guard rescue swimmer in the 2006 film “The Guardian” from Touchstone.) 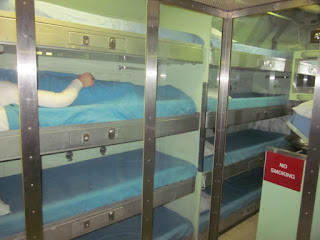