William Patry: "How to Fix Copyright" follows earlier book; he takes the concept of "gatekeeping" and attempted monopoly head on, but is short on specific policy solutions 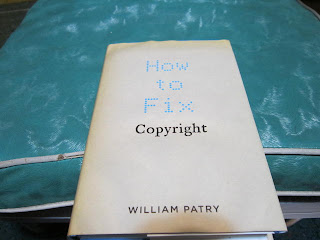 Author: William Patry
Title: “How to Fix Copyright”
Publication: 2011: London, Oxford University Press, ISBN 978-0-19-976009-1, 323 pages, hardcover, Introduction and twelve chapters.
Amazon link:
On Oct. 2, 2009, I reviewed an earlier similar book by Patry, “Moral Panic and Copyright Wars”.  The new book certainly seems timely given the recent appearance of Protect-IP (Senate) and SOPA (“Stop Online Piracy Act”, House) in Congress, which I have been following in detail on my main “Bill Boushka” blog.
But Patry is still short on specifics as to how to draw the legal lines – apparently he even had some disagreement with his publisher on this.  What Patry does explain – more cogently the second time around – is how copyright law probably doesn’t serve the public interest very well. Instead, it protects “an establishment”.
Patry spends a lot of space explaining how the music, movie and publishing industries have functioned for years (particularly book publishing, far back into European history in the previous millennium) as “gatekeepers”, maintaining artificial scarcity in media so they could maintain cash cows with maximum profitability for producing a relatively narrow range of and volume of media works for the public.  The whole model fell apart in the 1990s as the Internet generated first efficient platforms for UGC (user-generated content) and propagated mechanisms for users to download music and other content and circumvent the established bricks-and-mortar retail mechanism.
“Oversupply leads to gatekeeping”, he writes.   Gatekeeping had led to a world where established companies and agents could determine what could “get published”.   But there are really two problems.  One is that “amateurs” or at least neo-professional newbies produce media for lower cost and compete with legacy media, possibly threatening it.  This is really possible only because legal mechanisms (Section 230 and the DMCA Safe Harbor) largely shield service providers from potential downstream liability.  The concerns over Protect-IP and SOPA largely come down to fear that these downstream liability protections could be undermined or gutted, basically ending the ability of service providers to support “amateurism”.
The other problem is what really gets more attention in most legal actions.  Content providers get the law to regulate how devices can be used to copy content even for person use – leading to provisions in the DMCA that, with digital content, preclude what would have been Fair Use in the past.  Consumers can be precluded from making even their own personal copies.  This moves out into areas trying to regulate P2P networks and mass litigation against users (the RIAA lawsuits, and more recently suits concerning movie downloads by the US Copyright Group) which music producers have found just don’t work.
Patry doesn’t get into the copyright troll problem illustrated by the litigation brought by Righthaven against bloggers for reposting content from client newspapers, mostly smaller papers in the South and West.
Patry points out that at one time legacy media wanted to protect news facts from republication and sometimes wanted to charge search engines for showing links!  I think this went on around 2000, about the time the courts were deciding that html hyperlinks could not constitute copyright infringement because they are basically bibliographic attributions.  Video embeds, I think, could raise interesting questions.
Patry argues that legacy media are turning to the law to regulate a marketplace to their favor, instead of relating to new technology by being willing to price media properly and creatively.  Music companies, for years, lazily sold CD’s at higher prices than low-income consumers could afford, when these consumers could afford singles.  Steve Jobs forced them to accept “singles” pricing with iTunes.  Companies cannot save inflexible and outmoded business models, he argues, just by turning to the law to regulate away low cost competition or even “off the books” borrowing of material.
Is “intellectual property” to be viewed by policy makers as a traditional “property right”?  Patry says supposedly libertarian construct is a canard.  Creativity is not encouraged by a copyright system that encourages “winner take all” and a few superstars, and recycling of old material (like movie sequels) for short-term profits.  Creativity also involves some legitimate amount of “copying”. Patry explains how this works in classical music (variation forms), and it’s obvious he has a background in formal music. (It’s a stretch to say that the finale of the Brahms First came from Beethoven’s Ninth, but certainly the artistic and social “context” did.)
Patry discusses a facile metaphor (“The answer to the machine is a machine” from an obscure book by Charles Clark) and shows how it could be misused to support legacy regulation.
There’s a degree of social responsibility called for. Content owners are rapidly learning that it is often in their best interest to price according to ability to pay.  Even Verdi dealt with that in the 19th Century.
Visitors will want to visit the website for Creative Commons, here.
Here is some of Patry’s Feb. 2010 NYC lecture, “Law is not a business solution”.
Here's an interesting piece on Slate by Matthew Yglesias, "Should we stop online piracy: why a little copyright infringement is good for society and the economy", link here.  The relevant economic concept is called "deadweight loss".
Posted by Bill Boushka at 3:32 PM