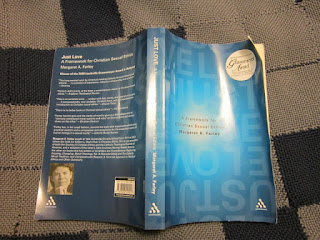 By now, many readers know that this book created a flap with the Vatican denounced the book and apparently asked the author, Sister Margaret Farley, to revise it. The New York Times has an account by Laura Goodstein and Rachel Donadio here. Wikipedia gives more background here.  As a result of the public controversy, the book shot up to the top in sales, and I had to wait about three weeks for more stock to get it from Amazon Prime.  The Vatican “never learns”.

Farley starts her account by discussing major philosophical history, including especially Michael Foucault and his “The Historical Constitution of Desire”.  This work emphasized that sexuality builds on other aspects of the human condition, including culture and the need to feel important -- ego.  She also discusses Sartre and existentialism.

There follows a history of the way civilizations have implemented institutions of marriage and family, and the different purposes that they ascribed to these.  Some cultures have recognized a place for homosexual interest among men, particularly the ancient Greeks, when they saw men as referentially “superior”.  Others, such as some native American cultures, have created priestly places for those who don’t fit neatly into two opposite genders.  But generally, cultures have tended to see the family as a basic tool for political and social control.  Often, aided by religious doctrines, they have seen the family and marriage as a way to engage the individual in maintaining a connection to “the common good”.  In some cultures there are elaborate rules about extended family responsibilities that connect to the legal and political system.  Muslim culture, particularly, evolved in a low-tech society of small isolated tribes – and “no one can survive alone in the desert”.  Therefore, every person had to connect himself or herself to building local community.   Of course, procreation and generation-raising were viewed as responsibilities shared by everyone in tribes that needed population to survive.  In many societies, polygyny (as a form of polygamy) developed, abetted by external or environmental circumstances and then rationalized within religion, and tending to create power battles for control.

Christianity was “different” at first with its preoccupation with an afterlife, which was thought to be imminent.  In time, Christianity added to the notion of the family a bridge to the notion that responsibility exists to larger community as well as to immediate and even extended family.  I think this can be read into the Gospels (there really was no possibility for individualism as we experience it today in most ancient societies, and “altruism” (as in Wilson’s book about eusociality, May 1 here) referred specifically to getting beyond immediate family obligations. Much of the notion about extended altruism developed with the Protestant Reformation. Christianity had been preoccupied by sexual desire as inherently sinful and egotistical. On p. 258 she writes:
“Sex could not be ‘justified’  by procreation or anything else, but only forgiven; and the context of forgiveness was heterosexual marriage. The cure for unruly desire was to be its domestication, its taming through the burdens of maintaining a household and the rearing of children.”
There is a bifurcation, then, even in socially conservative thought.  Is marriage an end in itself?  Is social altruism?  This is certainly a critical question from the viewpoint of a gay man like me who is “different” and monitors his world at a distance.  It appears that Vatican-style social conservatism, or Santorum’s idea of common good, views personality development as a self-generating cycle that needs momentum to work, rather like a storm.  You need some interest in others as a child to develop the ability to have stable intimacy as an adult, which further feeds altruism.  Some people never catch the train.
In the last chapters, she develops her own modern framework for sexual ethics, which invoke notions like commitment, fruitfulness, and particularly social justice.  She tends to become abstract and wordy.  It was her spelling this out on her own and contradicting literal Church teaching that made the Vatican mad.  Here ideas are a bit like those of Paul Rosenfels when it comes to ethics within a relationship, although she never mentions the concept of "polarity" specifically.  (See April 12, 2006 on this blog for the Rosenfels book review).
Her ideas to incorporate the possibility of committed same-sex relationships (she doesn’t get into the legalities of gay marriage but does mention the end of the military gay ban and the dissolution of the idea that social cohesion need be so delicate and vulnerable).  Toward the end, she refers to John Boswell, “Christianity, Social Tolerance, and Homosexuality: Gay People in Western Europe from the Beginning of the Christian Era to the Fourteenth Century” (University of Chicago Press, 1980).  She points out that the gay community's depending on "immutability" (perhaps genetically based) arguments is a somewhat intellectually unsatisfying strategy.

She discusses the idea of self-giving love in marriage, and the paradox that this must not eclipse the individual identity.

Although this is not the history of all gay men, I grew up with a lack of ability to compete well according to my gender.  So I tended to develop the process of “upward affiliation”, and the idea that another person was not worthy of my potential intimate attention unless he “had it all”.  Personal merit (including attractiveness) became equated with intrinsic moral virtue.  This sort of reaction happens in the heterosexual world too – how often have we heard the phrase (in evaluation a man’s female date), “is she the best he can do?”  She doesn’t get directly into the problem of upward affiliation, as George Gilder did in his 1986 book “Men and Marriage”.  (The antithesis is "aesthetic realism", a buzzword sometimes heard in the 70s.)  But it’s apparent (or at least plausible) that if the process is seen as acceptable, social deterioration can occur and a society, under the guise of enforcing “personal responsibility”, can start turning out its less fortunate or “weaker” citizens, perhaps tending toward eventual fascism.

In fact, the “ego” issue – the desire earlier in life to become a musician and composer – for which I do and did have some legitimate talent – raised as deeper issue – of attracting attention (particularly in public) without actually having a personal stake in (or responsibility for) others – a concept that other social scientists call “generativity”.  She does deal with this somewhat in her discussion of “fruitfulness”, and her somewhat general analysis of the way childless relationships (including homosexual ones) can contribute to future social capital. It's important that people without children are often expected to contribute to family life in other ways, such as with eldercare (recently becoming a bigger issue with lower birth rates) and sometimes helping raise siblings' or other relatives' children.  Family responsibility goes way beyond accountability for what happens "in the bedroom".  The capacity to form and keep "real relationships" related to actual need and maybe complementarity becomes itself a moral matter, just as its occurrence helps give others areas in which they not remain "competitive" all the time.

Here is a YouTube video from Yale Divinity School of Farley’s lecture “Desires, Loves and Reasons”.