Arvin Vohra: "Lies ... and College Admissions", and some hyperindividualism 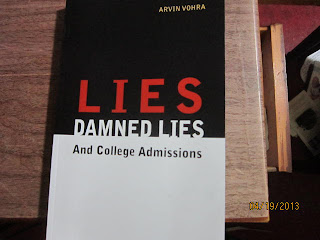 Amazon link is here.
The author ran for the Maryland House of Delegates as a Libertarian in the fall of 2012.  I saw him at the Libertarian Party booth at GLBT Pride in Washington in June but did not get to talk to him.
The author (b. 1979) has a degree in Mathematics from Brown, and started an education company at around the age 22, as documented on his website . He says he has developed the Synapse line of learning software.  I wonder if he would merge with the Khan Academy some day. 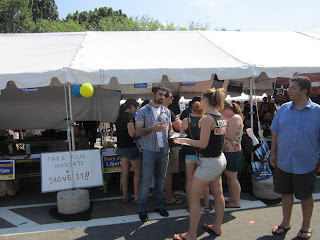 He also has an earlier book “The Equation for Excellence: How to Make Your Child Excel at Math” (2008).
His basic thesis in this book is that college education in the United States has become somewhat like an extortion system, setting high tuitions with government support, playing “Mother May I” with student finances, putting people into debt, all as part of playing the role of ranking people. He makes a useful analogy to the way the Catholic Church sold indulgences starting in the 14th Century.
Education, he says, should be viewed as a consumer service.  When people pay to learn, they should presented the material in as straightforward a manner possible.  Instead, they are often bemused my material deliberately made obscure to eliminate less “worthy” students.
And course content is censored.  That’s hardly news.  He mentions an organic chemistry course that deliberately skipped a chapter on how to make controlled substances (and that has wider implications for potential censorship attempts on Internet speech). And he discusses at some length economics courses that deliberately stilt basic mathematical theory toward a political interpretation favoring collectivism.
He is particularly concerned that public (and religious) schools and undergraduate university education stresses “obedience” and submission to the goals set by others.   That’s a double-edged assertion, of course.
I can related to his concerns about “ranking” students, including insistence that they parrot back what they were “taught”.  When I was in college and graduate school, young men were concerned about student deferments and about the kinds of assignments they would get if drafted (for Vietnam).  College seemed to be a way to weed out who was “expendable” to become cannon fodder for the war.   At the University of Kansas, I was an assistant instructor and had the authority to test and rank students.  This was an algebra class for students with below-par skills and I must admit that did flunk a lot of them (maybe 50% got D or less).  Was this a “power trip”?  It was certainly consistent with the times.  Other graduate students would say things ranging from, “They’re dumb” to :”If the student didn’t learn, the teacher didn’t teach” (Vohra’s point). My completion of duties as an "assistant instructor" and completion of an M.A. in Mathematics was followed by immediate immersion into the authoritarianism of Army Basic Combat Training, where obedience is the only virtue. I had gotten to dish it out before I had to receive it.  I would never again have such an "opportunity."
He also notes that students, particularly when writing class themes or admission essays, are encouraged to “look inward” and see where their difficulties could indicate essential moral weakness or sin, rather than the possibility that the system above them is corrupt (looking outward). Obedience seems like a particular virtue in authoritarian systems, where it become synonymous with "stability" because all ordinary people are "equally" poor.
He also is critical of the entire financial industry, of doing nothing productive, but of manipulating and lobbying government tax policy for their own benefit.  He calls financiers “college educated parasites”. But I used to hear that in the Army!
On the “Interludes”, he ventures sometimes into some of his own social and political views and religious interpretations.  He presents Jesus as practically a Clark Kent superman, intent on overturning political corruption and injustice but demanding obedience himself from disciples, who were encouraged to have no possessions to lose.  The apostle Paul, on the other hand, tweaked the Gospel to emphasize obedience to those in authority in the church community (and in family relationships).  He also notes the apparently anti-homosexual writings in Paul’s epistles, used by the religious right for gay-bashing.  (But if it is "only" better to marry than to burn, why is homosexuality a big deal anyway, when the End is nigh?) Jesus, on the hand, did not care about the way adults picked intimate partners and never took the problem up.  (In his campaign in 2012, he did support marriage equality in Maryland and noted that people who feel that gay marriage will undermine traditional marriage have no confidence in their own abilities in life).
Vohra often talks about knowledge and understanding as important for becoming a “powerful individual”.  It’s certainly true that many people are held back to satisfy the needs of others for some sort of social control, that they may see as connected to family, marriage, lineage, and social stability (and the ability to remain engaged in these).   Yet other people stumble because of factors beyond their control, ranging from genetics or medical to (ironically) wrongdoing by others.  What is to be our attitude toward the less able?  Vohra stumbles around on this troubling point, talking about how professors handle the topic of social Darwinism (or British philosopher Spencer).
On p. 166 he criticizes the practice of requiring community service, am writes, “What could be more wasteful than taking an overachiever who knows calculus and requiring him (to) ladle soup in a soup kitchen? What a waste of brain power?”  This is not really how one of Ayn Rand's heroes would talk.
I wonder how Charles Murray (“Coming Apart”, March 14, 2012), with his emphasis on voluntary altruism and social capital, would view this statement?  True, “community service” is often bureaucratic and volunteerism can become another world demanding obedience.  But it needs to happen.

In the YouTube video above, Vohra teaches speed-reading. In high school in the early 1960s, we had speed-reading machines.  Note what he says about prepositional phrases.  They matter. "Fred sat on the porcupine."

An angry email I got from someone from Australia in 2006 may seem relevant here (to the attitude toward volunteerism and others in general).  "You are not more creative, wise, and all-knowing. What gives you the right to the idea that you are intellectually above the 'cretins' of the world?  Education is a tool, not a weapon to threaten anyone with. If a majority of people are not able to understand your train of thought, as you have observed, then it is you who is not communicating efficiently."

An obviously well-related topic would be the rise of "for profit" universities (especially "online degrees") and the practice of internships, and earning academic credit for them (or for "volunteerism").

Also interesting is the comedy film "Admission" (about Princeton), reviewed on the Movies blog March 30., 2013.
Posted by Bill Boushka at 11:09 AM